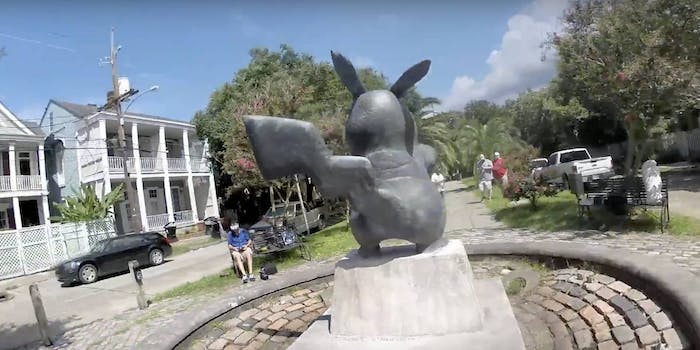 A wild Pikachu appeared, and it's here to stay.

The sweltering summer heat of August in New Orleans has yet to deter determined Pokémon masters from wandering the streets, sweating their asses off and trying to catch ’em all. If anything, it’s inspired them.

A mysterious fiberglass Pikachu statue appeared in the Lower Garden District on Sunday morning, eliciting delight from neighbors and turning the humble shaded stretch of park leading into Coliseum Square into a hyper-modern tourist destination.

No this is not news. It's not photoshopped either: #Pikachu statue mysteriously shows up https://t.co/ElrFpg1AC1 pic.twitter.com/4aUkuKrOTP

The empty space where that Pikachu and its #Pokémonument stand once held a fountain, though in recent years it had played host to old tires rather than flowing water. According to the Guardian, NOPD has chosen to sit on their hands and passively give Pikachu the OK. A rogue, miraculously innocuous statue certainly beats having a glorified trash can in that space.

Street performers (read: a guy dressed as Pikachu) have graced the statue with their presence, paying homage to the most sought after Pokémon Go starter in the game. The only thing missing is Niantic relenting and turning the Pokémonument into a PokéStop.

I hope nola leaves up #pokemonument 4ever. Ppl were leaving offerings & rubbing Pika belly. What a time to be alive. pic.twitter.com/ZwwUjZdkF1

Went to check out the #pokemonument & there was a special guest. #PokemonGO pic.twitter.com/VKT5i5iGYe

The Pokémonument isn’t the only Pokémon-inspired art that’s popped up in the city. Across town, in the Carrollton neighborhood, a graffiti artist has turned the exterior back wall at a gas station into a plea to get Pikachu into elected office. Looks like Squirtle is his de facto running mate.

With the Republican party being ripped to shreds by its presumptive nominee, a Pikachu/Squirtle ticket just might be the GOP’s next best option. Pikachu’s certainly done wonders for the city of New Orleans without holding an official position—imagine what he could do in the highest office in the land.

Update 5:07pm CT, Aug. 14: According to the Times-Picayune, the Pokémonument has been removed. A QR code that scans to this website with an artist’s statement as well as the hashtag #Pokégone are now in its place. Artists state that the monument was never meant to be permanent and has instead been donated to the Coliseum Square Association. The Pikachu statute will be auctioned off so that a fountain can be built in its place.

“We would like to use that positive momentum [the statue has garnered] to bring about a larger, more permanent change for our community,” the anonymous artist stated. An auction date has been set for Sept. 25.