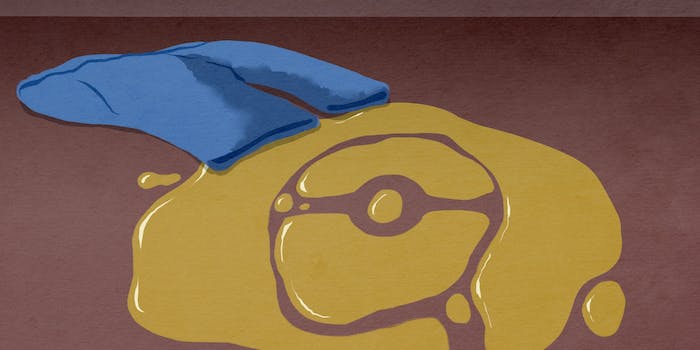 He didn't even catch the Aerodactyl. Shameful.

A lot of messed-up things have happened to Pokémon Go players since the game debuted—the combination of engrossing gameplay and walking around in the real world seems to invite disaster, up to and including stepping off a cliff. But no incident yet has been as embarrassing as one man’s tale of playing Pokémon while trying to hold in his pee.

He writes that he was playing the game near the local shopping center, and even though he had to pee, he couldn’t resist trying to catch a rare Aerodactyl. Unfortunately, the Pokémon put up an impressively long fight, and unimaginable disaster soon struck.

We’ll let our hero pick it up from here:

As I approach the corner entrance to the shopping centre I’m about to burst, I’ve inherited my fathers bladder and at 32 years of age I pee at least 20 times a day and by fuck do they come on quick and fast. I’m practically running at this point and as I reach the door this little kid comes full speed and runs into me, head first into my crotch.

Well I don’t need to tell you what happened next but I will because its the whole point of the story, when he headbutted my goolies I pissed, a lot. Wearing shorts this piss flowed down my legs and all over this kid, it was all down his wee shirt and trousers and I was soaked. His mum was mortified and his dad laughed so loud the whole shop was watching, I apologised and explained I wasn’t feeling well, I didn’t know what to do. Poor kid started crying and I’m stood there just ashamed. The parents where pretty understanding though and apologised for their kid, I think they just pitied me, I would.

I walked the two miles home in piss drenched shorts and foot wear and cursed the entire way.

No, it was not. It was an occurrence from an actual nightmare. The shame must have been unbearable. And all for an Aerodactyl that he didn’t even get to catch.

Stories in the Today I Fucked Up subreddit often blur (or obliterate) the line between fact and fiction, and should always be treated skeptically. For example: how did this guy’s piss escape his shorts in such way that it drenched the toddler in front of him? Shouldn’t the shorts have blocked the stream, sending most of it harmlessly down the leg? Was the kid so small, or our gentle narrator so tall, that it cascaded out of the shorts-legs and onto the wee one’s clothes?

The physics are mildly suspect, and imagining the scenario too vividly is… not good. Maybe the best thing to do is take the story at face value, because the little details—the CP score of the Aerodactyl, the father’s laughter–ring true.

Piss stories, as a genre, lend themselves to morals (whether we want to hear them or not) and the moral here seems to be: Hey, maybe you shouldn’t ignore your body’s very clear signals in favor of a low-stakes mobile phone game.