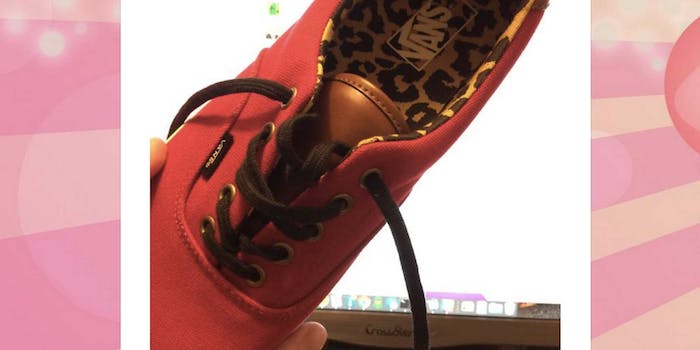 Back in February, Twitter power user @fart (real name Jon Hendren) was foolish enough to post this photo of some shoes he had purchased.

What followed began as something of a good-natured ribbing but eventually edged into legitimate roasting, emotional abuse, and over the course of many weeks, outright harassment. In particular, @Arr (David Thorpe) proved unwilling to let the issue drop, continuing to blast Hendren’s footwear for the rest of the calendar year.

Read the best of his shoe-dissing and try not to pee your pants:

Anyone looking to get in on the action may take heart: The thread is continually revived, and as of this very minute, people are still replying to the original photo. There’s just no shaking them.

@fart if gamergate were a pair of shoes they'd be these

Glad you enjoyed the shoe content. Interactions have been through the roof. All credit really goes to my social media team; once I saw the viral opportunity the shoes presented, they agreed to put in a late night coming up with some fantastic content.

Furthermore, Hendren has been a good sport about it.

There’s no real hard feelings between Dave and I. I think he’s really smart and really funny. Only thing is, he tends to hire vengeful scoundrels for his social team. The entire reason the roast went on as long as it did is that they knew from having worked with me that my head writer Paulo had already gone to bed, leaving me essentially unable to respond. It was pretty bad at the time—my Klout went down almost 4 points—but thankfully I don’t believe it damaged my brand irreparably. Interactions and brand awareness are as strong as ever, and Dave and I made up over a bottle of white zin a few weeks later.