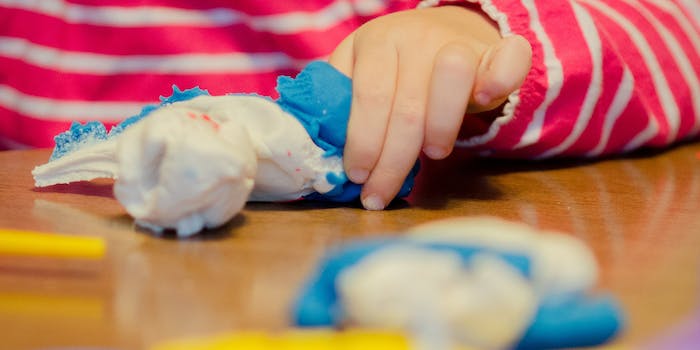 It's only the tip of the debacle.

If you gifted your precious angel with Play-Doh’s Sweet Shoppe Cake Mountain Playset this Christmas, you may have given your kid an unexpected lesson in human anatomy. The $20.00 bakery set, which allows kids to turn colored dough into miniature decorative cakes, includes an icing extruder that looks a lot like a NSFW sex toy.

As you could expect, parents not ready to field questions from their youngsters about how colored dough shooting out of the dong-shaped dispenser could lead to a bun in mommy’s oven are furious and have taken to Play-Doh’s Facebook page to voice their outrage. Parents across the country, claiming that the dil-doh-esque dispenser “completely ruined” Christmas have posted pictures of the part, only to have them quickly deleted by whoever manages social media for the Hasbro-owned company.

I dunno if anyone else follows Play-Doh on Facebook but you should cause they're doing some serious damage control pic.twitter.com/TooleS5PgE

I salute the designers who somehow managed to get this Play-Doh icing maker past their bosses. http://t.co/cRCnsEMmmo pic.twitter.com/0aQMtJS9Wi

Apparently the issue isn’t a new one. One purchaser of the Play-Doh cake set took to her blog back in late November, writing a post entitled “The Time I Gave My Friend’s 2-Year-Old a Penis-Shaped Toy.” According to a report from Tulsa Channel 8 News in November, the company has previously been made aware of what the part resembled and have made plans to replace it with something less anatomically correct. A Hasbro representative told the station:

We have heard some consumer feedback about the extruder tool in the Play-Doh Cake Mountain play set and are in the process of updating all future Play-Doh products with a different tool.

But it seems that Hasbro didn’t update their play sets soon enough. Let’s just hope this doesn’t cause any deep-seeded psychosexual associations for kids and cake.