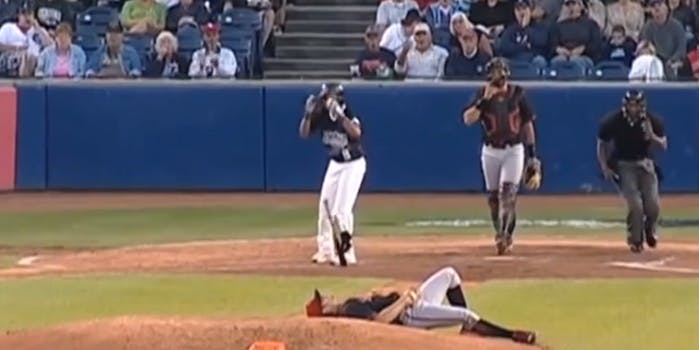 Watch a pitcher come within inches of losing his face

Daniel Norris shut his eyes and reached his glove up.

“Where can I go watch Sportscenter this early in the morning?”

It was a question asked Friday morning by Daniel Norris, a pitcher for the Lansing Lugnuts, the class-A affiliate of the Toronto Blue Jays. Norris was asking because he was pretty confident he’d get featured on the telecast. One night before, he was involved in the most hair-raising play anybody on a baseball diamond had taken part in.

Pitching to Western Michigan shortstop David Gonzalez in a 1-1 tie in the bottom of the fifth inning, Norris saw a fast ball get whipped right back up the middle of the diamond. Gonzalez hit the ball so hard, and so on the nose, that it actually scorched back to the exact place from where Norris threw it—in actuality, it was coming at his head.

That’s when instincts took over. Norris, who’s toiled in the Blue Jays system for two years and now sports a 4.64 ERA, shut his eyes and reached his glove up, nabbing the ball just inches in front of his freaked-out face.

He went to the ground after making the catch, presumably counting his blessings and taking stock of the full life that flashed before his eyes in the split second that he realized the ball was coming straight for his cranium.

Gonzalez, on the other hand, stood in disbelief, dropping his head into his hands and walking off sullenly.

Norris did go on to get featured on SportsCenter’s Top 10: He came in at No. 4.