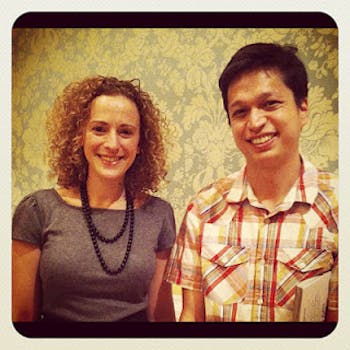 Ben Silbermann runs one of the hottest new Web communities. Here's what we just learned about how he got his start.

Pinterest, the image-sharing board, is one of the fastest-growing Web communities we’ve seen. It’s also one of the most secretive, as its small staff tries to cope with runaway success. So when we heard that cofounder Ben Silbermann was speaking at Alt Summit, an event for lifestyle and design bloggers, we knew it would be a rare glimpse behind the Pinterest curtain.

Silbermann’s speech, “How Pinterest Became the Next Game Changer,” delivered just that, according to Alt Summit attendee Jennifer Mehditash, revealing key details of Pinterest’s creation—and its self-effacing creator’s back story.

Mehtidash, an interior designer and Pinterest expert who blogs at Dec-a-Porter, wrote up the speech in detail and subsequently spoke to the Daily Dot about the reception Silbermann’s speech received among pinners in attendance. (As far as Mehtidash knows, the speech was not recorded—making it a rare offline experience in this YouTubed age.)

“It was very packed,” Mehditash told the Daily Dot. “Every single person that attended Alt Summit was there, at least 500 people. There were also people who came just for the talk. At the very end, he got a standing ovation with a lot of cheering and clapping for quite a while.”

The speech spanned much more than the creation of Pinterest.

“it was absolutely a life story, though that wasn’t necessarily his intention,” she said. “He told us a story about how Pinterest came to be. He talked about how it went aganst the odds, being created at a time when the world was falling apart.”

Indeed, Silbermann began working on Pinterest right after leaving his job at Google in 2008—weeks before the market crash. It was then, Silbermann said, that he developed his personal motto: “People succeed because they don’t stop.” He didn’t yet know how true this would be.

“If he had had investors waiting when he went out the door at Google, we would have appreciated Pinterest all the same,” said Mehditash. “But the way he did it took far more courage.”

Within the next year, Silbermann connected with his childhood friend, Evan Sharp, who shared a mutual interest in collecting. (Last year, he told HGTV he collected everything from insects to stamps to books, an eclecticism reflected today in his craft- and decor-heavy page of pinboards.)

Along with Paul Sciarra, an entrepreneur, the group began working on the network that would eventually become Pinterest.

In March 2010, Pinterest launched. Silbermann said that he himself pinned the very first pin. It was “a paper cutout I found on Etsy,” he said, of a young couple kissing atop a bicycle. This handmade item set the mood for the design-oriented early pins to follow.

From there, design bloggers had a lot to do with Pinterest’s early growth. Following the first Alt Summit—short for Altitude Design Summit, a now-annual event held in Salt Lake City—in January 2010, Silbermann worked with 30 design bloggers to begin Pin It Forward, the blogosphere’s effort at promoting both Pinterest and one another. Chief among them was Victoria Smith, the editor of SFGirlByBay, whom he’d met at Alt Summit.

“Together, they devised Pin It Forward as a way for bloggers to use Pinterest,” said Mehditash. “Through that connection, the use of Pinterest took form. It inspired a lot of other creative individuals to use Pinterest.”

Though his startup keeps him very busy, this early encouragement is why Silbermann said he made time in his schedule to return to Alt Summit, nearly two years later.

“It was a chance encounter that they met at Alt. That story, told to a room full of people trying to make that kind of connection as well, helped create amazing energy,” she said.

After the speech, Mehditash said she and other attendees were able to get a feel for Silbermann’s approachable personality.

“He chatted, hugged, took pictures, he even signed my program,” she said. “There was always a line of women to talk to him, and he was always talking to somebody. He didn’t have to do that. He was there almost the entire time.”

Mehditash said that Pinterest was the second-largest traffic driver to her blog and had changed her life. Of Silbermann, she said that she’s glad success came to such a deserving person.

“It’s wonderful because so many people feel so passionate about Pinterest and how it’s changing their lives,” she said. “And for him to have that kind of recognition is amazing.”