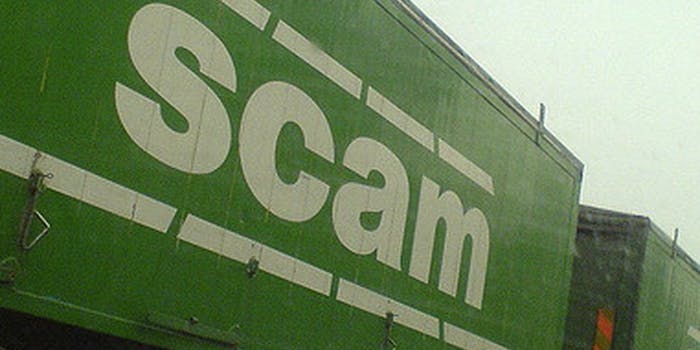 Steve may or may not making be making thousands spamming Pinterest, but his story revealed a very real issue for the community.

The man who said he spams Pinterest for $1,000 may or may not actually be a spammer. But he’s definitely a liar.

On Tuesday, the Daily Dot published an interview with Steve, a 24-year-old, self-described spammer who claimed to be making thousands on Pinterest by connecting spambots to an Amazon Affiliate account. The revealing interview seemed almost too good to be true.

Now, after requesting a follow-up interview, Steve claims that is the case.

“It was a hoax, period. My name is really Steve and I really do have three aviation associates degrees. I thought it would be funny to play this prank seeing how popular Pinterest is and see how fast it could go viral.  I noticed the story on The Daily Dot and on Total Pinterest. I read both stories, and I saw his affiliate tag and wondered what kind of damage I could do. Honestly if it hadn’t grabbed this much attention I probably would have kept playing along.”

Steve continued to say that he faked the verification screenshot he sent us using FireBug, a Firefox plugin that allows users to alter the appearance of a website within their own browser.

But is Steve a prankster, or is he a spammer having second thoughts, concerned that publicity will clear his lucrative business off the pinboard?

Unfortunately, there’s no way we can verify the answer either way.

The privacy policies for both Pinterest and Amazon forbid the companies from publicly disclosing personal information about users. And since all of the spambots in question are just that, bots, it’s hard to trace the owner behind them.

The Daily Dot can verify that final-fantas07, which inspired our original report on Pinterest spam, is a real Amazon Affiliate account, because we’ve found dozens of working affiliate links—like this one—that include the username. Amazon did not respond to requests for comment.

While we can’t verify Steve’s identity, spammers from the site Black Hat World not only confirmed the facts in his account as realistic but also derided him for sharing his secrets.

“I have a few sites doing $1000/day right now and I would NOT tell anyone about them or how they earn,” wrote meathead1234 in a discussion about the interview.

Steve’s second most fantastic claim—that Pinterest has only shut down one of his bots—continues to check out. The account final-fantas07, regardless of who actually operates it, is still out there scamming Pinterest.

And if the dozens of bots we highlighted in our previous story are any indication, no major shutdowns have taken place. Even the most obvious bots, such as Dinorah Ohotto, Josefa Galea, and Gerry Nishi—each of whom pin identical images to one another—are free to continue their automatic ministrations.

So who is this spammer? Unfortunately, there’s no way to tell right now. Even if another person claiming to be final-fantas07 came forward, the only way that individual could prove his or her identity—a screenshot—could be faked (again).

Regardless of its validity, Steve’s story helped expose a very real issue for Pinterest and, perhaps unintentionally, contribute to a solution.