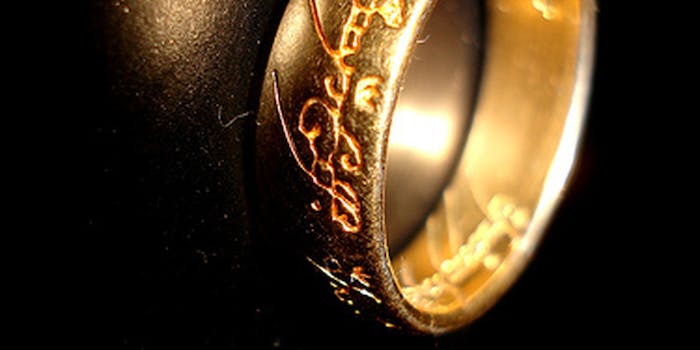 On social news site Reddit’s AskReddit section, you can poll community about anything — from sex advice, to help dealing with the loss of a loved one, to your best drinking stories.

It’s a chance to pick Reddit’s collective brain — and, it turns out, a great place to find great answers to obscure questions, especially of the geeky persuasion.

That’s what DivinityInsanity found out when the redditor asked a simple question about the fantasy book and film epic, The Lord of the Rings

“Supposedly the ring is very powerful, and everyone wants the ring to use it against the enemy and all that,” DivinityInsanity wrote in a post on the AskReddit community. “But can the ring actually do anything at all?”

The question was referring to the One Ring, which drives the plot in the books and movies. Chances are you’ve never wondered that question yourself.

But luckily for DivinityInsanity, another redditor had. Comedian70 hadn’t just thought about, in fact. He’d researched it, heavily. The answer, it turns out, is quite complex. Which is why he responded to DivinityInsanity’s question with a monstrous 821-word response.

That comment received over 3,000 upvotes. It was even featured in Reddit’s r/bestof section, a place where redditors highlight the best comments from across the site.

But the discussion didn’t stop with Comedian70’s essay — his post spawned an entire discussion of its own. And that, in turn, became a veritable Cliff Notes cheat sheet of the novels (something no doubt quite useful for some redditors, who recently claimed that the fantasy classics were just too difficult to slog through).

The lesson? If you’re just dying to know something, Reddit may be one of the best sites on the Internet to get answers. But if the question is geeky, just be careful — the response could be overwhelming.

One redditor, at least, kept things in perspective..