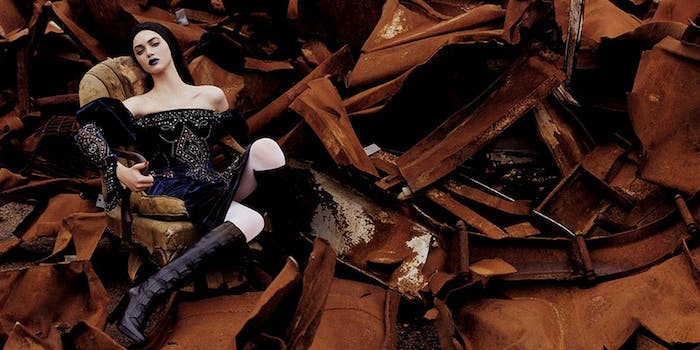 The Photoshop Bill gets people talking about how altered images trick us into thinking that the impossible is real.

Because this is a story about altered images, I could start off by listing examples of egregious Photoshop disasters. Maybe follow that with a paragraph on the fact that we’re not even aware of a lot of the retouching in advertising and media. Cue indignant outrage, etc. But I know this crowd is already quite aware of the problems behind radical Photoshop, right? Well, turns out that some lawmakers are, too.

The Truth in Advertising Act of 2014, submitted late last month, would require the Federal Trade Commission to regulate the use of “images that have been altered to materially change the physical characteristics of the faces and bodies of the individuals depicted.” (That’s legislative speak for “crazy-retouched images,” as far as I can tell.) While the bill wouldn’t ban overly Photoshopped images, it would force the FTC to study them and recommend a plan of action.

The backers of the bill (and the Eating Disorders Coalition, which lobbied for it on Capitol Hill) point out that these impossible images basically make people feel like crap while simultaneously glamorizing a skinny ideal. To which any grown woman can succinctly respond: Duh. So the idea is that by investigating the impact of these altered images, the government can then figure out how to regulate them, and everyone feels better.

Which is a wonderful idea in theory, but I don’t see this bill making it. (Even a co-sponsor of the bill, Rep. Lois Capps, acknowledges that it’s an uphill battle.)

So on one level, it’s a symbolic move. It gets people talking about how altered images can harm self-esteem, encourage disordered eating, and trick us into thinking that an impossible image is real. The more we shine a light on these altered images, the more we can (theoretically, at least) combat the bad feelings that they often deliver. This is a good and necessary cultural dialogue.

I’m not sure that legislative action is the most logical solution, though, partly because it’s not that powerful elsewhere. For instance, the United Kingdom has more regulation of its advertising, and every so often, you’ll see a brand get called out for digitally lengthening lashes in a mascara ad. The brand pays a fine and gets a ton of press — all press, they say, is good press! — and a few months later, the pattern repeats itself with some other visual fudging. I admire the UK for trying to call out blatant trickery, and its goal isn’t as linked to self-esteem as the bill being proposed, but the efforts are barely making a dent.

Of course, some sort of mandatory disclosure could, at least, remind us that the image we’re seeing isn’t real. Maybe a quick description —something like “this image has been digitally altered to smooth the thighs, lengthen the legs, and reduce the waistline”—could give people an idea of how much is done to the typical mass-media image. But would that even be possible, logistically speaking? Imagine the labor that would go into disclosing the retouching of an average magazine issue. (Also, I’m assuming that a lot of people wouldn’t be keen on showcasing how much they were retouched. I can’t blame them.)

So if this bill doesn’t hit the big time, how do we respond to these radically digitally altered images? (And by digitally altered, I’m talking about stuff like the NSFW Karlie Kloss ribs debacle, not removing a stray hair.) There’s no easy answer, but these are three things that help me feel better when confronted with impossibly flawless images:

1) I minimize exposure to images that make me feel lousy.

I love magazines, but a few years ago, I realized that a lot of them made me feel self-conscious, homely, poor, and generally inadequate. So I stopped reading those, and instead, I subscribed to magazines that make me feel smarter, like Highlights.

2) I tell other women that they are beautiful.

You can make someone’s day by telling her that she is beautiful. (I prefer “is” over “looks,” by the way; it’s a subtle but meaningful distinction.) The funny thing is, the more you do it, the more you feel good about yourself. When you start looking for beauty in real life, you find it—maybe even in yourself.

3) I focus on the positive.

I could say that I have uneven eyes, scars on my face, and my dad’s crooked nose. OR I could say that I like the way my eyes seem to shift color, or that the scar by my brow is kinda intriguing, or that I get a glimpse of my late father whenever I look in the mirror. Framing your inner narrative is important. Make it a loving one.

This article was originaly featured on XOJane and reposted with permission. Annie Tomlin is a writer living in New York City. She likes music, beauty, photography, and Munchkin cats. Say hi at @annie_tomlin on Twitter or @annietomlin on Instagram.

Photo via fervent-adepte-de-la-mode/Flickr (CC BY 2.0)