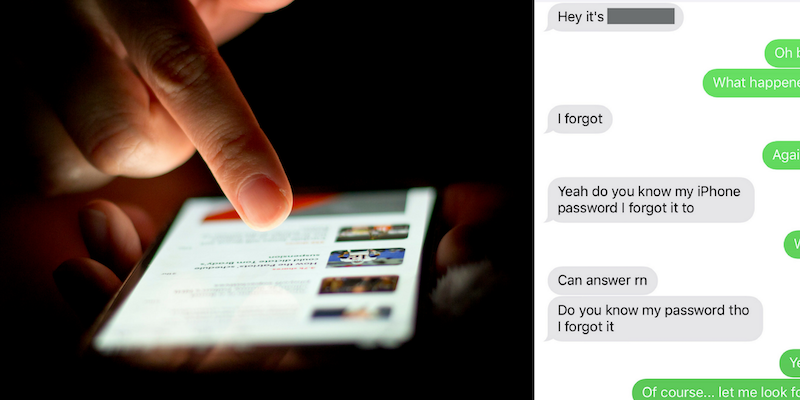 This phone thief didn't know what hit them.

When his little sister’s iPhone and wallet case were stolen a week ago, this Imgur user had little faith they’d be able to retrieve it. His sister, an incoming high school senior, had worked all summer to purchase the phone, but somehow either had it stolen out of her boyfriend’s car, or didn’t notice it fall out.

She hadn’t activated the Find My iPhone app before it went missing, so they reported the phone stolen, along with all the identification and other cards stored in her case.

Then, on Thursday, the user received a strange text from a number insisting it was her sister. Once he called her and determined it wasn’t her, he decided to have a little fun with the person attempting to get her information from him. Sharing his now-viral story on Imgur, this hero of a brother proved that you really can out smart a thief.

“Yeah do you know my iPhone password I forgot it [too],” the person texted him.

When the Imgur user tried to call the number and was told “his sister” couldn’t answer, he played along, acting like he was looking for it.

After receiving little response, the thief asks, “Are you mad at me?” Which sets the Imgur user up for an amazing play.

“Well, you did leave us to do all that work with the you know who,” he wrote back, alluding to some type of murderous, mob-related activity. “We had to take the you know what and dig a hole three times as deep as we had planned. So took a while.”

“You know the boss has your password and find my iPhone set up. If he finds out you got locked out of your phone I will not be able to step in for you again,” the brother wrote later. “You know he gets carried away when he drinks.”

The thief then asks the brother to not tell the boss, to which he says “you are in for it now.” He then instructs the thief to “bury the suitcase” and take the cash—there’s enough to last them six months, whatever that means. Then, whenever the thief tries to run, the brother sticks to his vague story, insinuating death will come to this poor person.

When the thief comes clean, however, the brother tells him about “Avery [sic] serious bad man…who can track that phone.”

Despite the grim tone of these prank texts, there’s a happy ending to this story—the brother was able to convince the perp that he’s in danger, so he subsequently dropped the phone off at the local sheriff’s office.

Perhaps it takes a (fake) criminal to catch a criminal, after all.