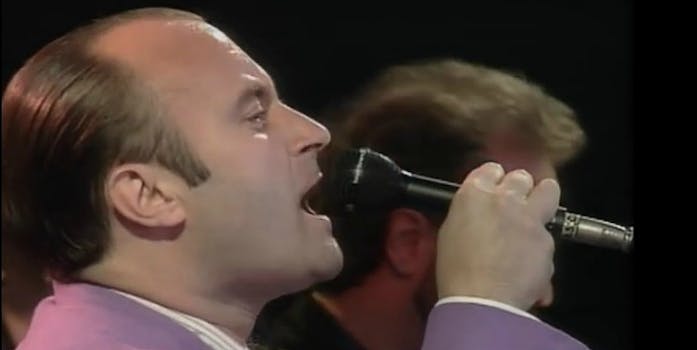 Against all odds, Phil Collins is returning.

Phil Collins must be stopped.

That’s the title of a recent petition on change.org, in which the organizer wrote that “Phil Collins has announced he is ‘no longer in retirement.’ There is far too much suffering in the world as it is. This must be stopped.”

The organizer is right about one thing. Collins, the former drummer and lead singer of prog-rock pioneers Genesis and one of the most successful solo artists of the 1980s, recently told Rolling Stone that he’s about to make a comeback. “I’m no longer officially retired,” said Collins, who hasn’t released new music since 2002 and who has struggled with neck injuries and nerve damage in his hands that have left him unable to drum. “The horse is out of the stable and I’m raring to go.”

Although Collins has sold about 150 million records as a solo artist, clearly not everyone is excited by the news. For instance, the organizer, the 2,668 who have signed the petition as of 5 p.m. CT Friday, and some of the commenters who agree that something must be done. (The best quip by far was: “I struggled for years with addiction to Phil Collins’s music. Just take a look at me now.”)

But when I saw the petition, I was mildly bemused, then somewhat disturbed, then fairly angry. It’s because Collins has taken too much guff during his career. He’s the balding, average-looking bloke who has bashed us over the head with a ton of pop songs (from late-era Genesis to his solo career), some of which are great, most of which good, a few of which are lame. He’s successful beyond anybody’s wildest dreams, and even though he looks like an accountant who’s been doing your taxes for the past 10 years, he’s a rock star. And sometimes rock stars can be annoying.

Yet, Collins deserves his defense—because he’s a fantastic musician and because there’s no reason to stop Collins from what he does best. Thus, here are five reasons why Collins must be allowed to continue. And perhaps why he should be celebrated for doing so.

1) He hits those drums, man: Before he was behind the microphone, he was behind the drum set, watching as Peter Gabriel sang and wore impressive headpieces for Genesis’ first six albums. While Gabriel was the style of Genesis, Collins made up its backbone.

Collins’ drumming days might be over, but they should not be forgotten.

2) He was Dave Grohl before Dave Grohl—just with less hair: After Gabriel left Genesis in 1975, Collins took over as lead singer, and though his singing style (and his sense of fashion) were quite different than his predecessor’s, Collins has proven himself as a worthy vocalist and showman. Two examples:

4) His kids have never seen him play a live show—with the possible exception of this one—and they want their chance:

“My kids are now 10 and 14 and they want to see what their dad does,” Collins told the magazine. “They were in nappies when I was last on the road. They love my music and I’d like to take them out so they can enjoy it.”

5) Phil Collins thinks you might hate him, and that’s not what he deserves:  I know, let’s all feel so very bad for the musician who has made so much money in his career. Poor baby, etc. But let’s not forget that Phil Collins is a real human being with real feelings.

This from a 2011 Rolling Stone article:

He has been called “the Antichrist,” the sellout who took Peter Gabriel’s Genesis, that paragon of prog-rock, and turned it into a lame-o pop act and went on to make all those supercheesy hits that really did define the 1980s. So, he wants to move on. He could make another original album, but he knows that will bring a rehashing of all the old criticism. It’s inescapable. Forget it. He’d rather spend his time in his basement, building up his collection of Alamo memorabilia, which, oddly enough, is his great consuming passion these days. “I sometimes think, ‘I’m going to write this Phil Collins character out of the story,'” he says. “Phil Collins will just disappear or be murdered in some hotel bedroom, and people will say, ‘What happened to Phil?’ And the answer will be, ‘He got murdered, but, yeah, anyway, let’s carry on.’ That kind of thing” …

Oasis’ Noel Gallagher started hammering on him any time he could, to uproarious effect. Among his choicest bons mots: “You don’t have to be great to be successful. Look at Phil Collins” and “People hate fucking cunts like Phil Collins, and if they don’t, they fucking should.” And so it’s gone, especially on the Internet, where I Hate Phil Collins sites have flourished. He gets criticized for everything. For his hair, for his height, for his pants (pleated khakis), for his shirts (tucks them in), for being “a shameless, smirking show hog.”

“I don’t understand it,” [Collins] says, looking pained. “I’ve become a target for no apparent reason. I only make the records once; it’s the radio that plays them all the time. I mean, the Antichrist? But it’s too late. The die is cast as to what I am.”