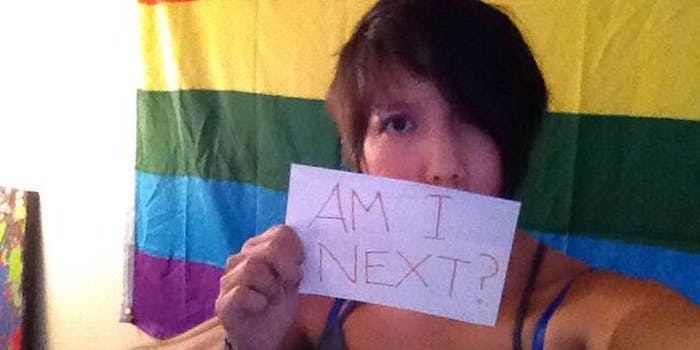 In Canada, women are using the hashtag #AmINext to raise awareness for the number of missing or murdered indigenous women across the country.

The campaign began with Holly Jarrett, whose cousin Loretta Saunders was murdered while writing her honors thesis on the topic of violence against Aboriginal women in Canada.

In a Change.org petition that has now been signed by more than 320,000 people, Jarrett wrote, “Our family is Inuit, and Loretta has now become one of the over 1,186 missing or murdered Aboriginal women she was fighting for. It is time for our government to address this epidemic of violence against Aboriginal women.

The #AmINext hashtag is partly directed at Prime Minister Stephen Harper, who recently described the level of violence against Aboriginal women as “a sociological phenomenon.” This statement was highly controversial, with many people saying that it disregarded the systemic nature of the problem, and failed to frame it as a criminal issue.

This social media campaign is spreading like the Ice Bucket Challenge, with women tagging friends to post an #AmINext selfie within 24 hours. The hashtag puts a face to the disproportionate danger faced by Aboriginal women in Canada, and demands that more people take notice.

#AmINext #MMIW Because of the Highway of Tears pic.twitter.com/VMLPXBPksC

Harper and the Canadian government have so far refused to launch a national inquiry, but with thousands of people signing the Loretta Saunders petition and many more posting on the #AmINext hashtag, this campaign is still gathering momentum.