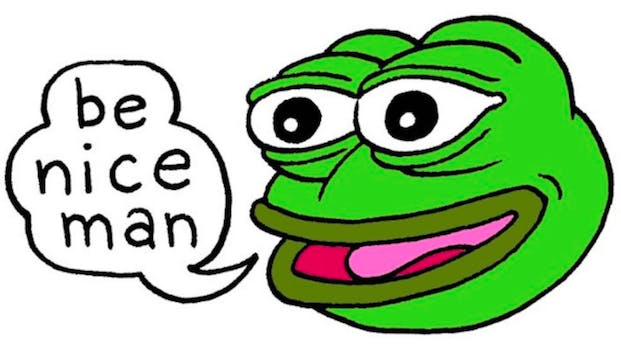 The ‘alt-right’ is doubling down on Pepe after lawsuit threats

Pepe is too big to fail.

This week, lawyers working on behalf of Pepe the Frog creator Matt Furie sent a slew of takedown notices aiming to stop the white supremacist “alt-right” from using the character. The tactic had worked last month against a children’s book that misappropriated Pepe, but it may be less effective against meme-loving shitlords who use Pepe without profiting from him. Furie’s legal team has asked a number of major sites, including Reddit, to crack down on the misuse of his character, but that may just lead to a game of whack-a-mole with an emboldened “Kekistan.”

Already, posters on the Meme Economy subreddit, where memes are “bought” and “sold” like stocks, have noted that the attempt to suppress the “alt-right’s” use of Pepe has only led to a “bubble.” Defiant meme lovers are using him more than before. Not all of them are pushing conservative talking points, either. Before he was a Trump-boosting mascot, Pepe was an everyman meme that could be remixed, modified, and passed around like trading cards. Lovers of these creative “rare pepes” fear that Furie’s crackdown will affect them, too, so they’re posting and stockpiling pictures of the frog at an increased rate. (All quotes sic)

“HOLY SHIT PEPE PRICE SKYROCKETED ITS WORTH BILLIONS!!!! Pepe the Frog’s creator threatens to sue anyone who uses Pepe and “Altright”, including Reddit if it doesn’t force /r/The_Donald to censor Pepe,” screamed one poster on r/memeeconomy.

“This will make them use it more. If they really want the alt right to stop using Pepe,they should try to appropriate it to normies and liberals. Then they’d really reduce their usage of pepe,” another responded.

“This isn’t a bubble, this is a meme creating controversy. The fact that the creator of the cartoon is trying to rein it in will only help its value, both short and long term. Controversy now is good for short term, keeps the meme too hot for normies, and ensures new variations are made extending the lifespan even further,” another posited.

In fact, some Meme Economy analysts have stopped treating Pepe like a regular meme that can grow or “die.” They’re calling him the “gold standard,” against which all other memes are valued.

Furie was put in a difficult position when his character became the unofficial mascot of Trump-boosting trolls. At first, he tried to win hearts and minds by reminding the world that he’d created Pepe as a laid-back, chill guy, not a hate symbol. It was too late, though. When Pepe became a meme, 4channers and other assorted shitposters considered him their property, his character and meaning having developed beyond Furie’s control. Now Furie is in the position of using what he has left: his legal rights as the creator of Pepe.

The best he can hope for, though, is to stop people who blatantly profit from the character, like the author of kids’ book The Adventures of Pepe and Pede. Social media sites can try to police Pepe use, but they’re ultimately not on the hook for the content their users post, and individual takedowns are an exhausting game. (Just ask any band that’s tried to fight music piracy.)

However, Furie can try to cut the snake off at the head, stopping alt-right microcelebrities like Mike Cernovich, Richard Spencer, and “Baked Alaska” from using Pepe. That’s been his legal team’s focus thus far. Down in the trenches of 4chan and Reddit, though, the people who turned Pepe into pro-Trump “meme magic” are more determined than ever to keep using him that way.