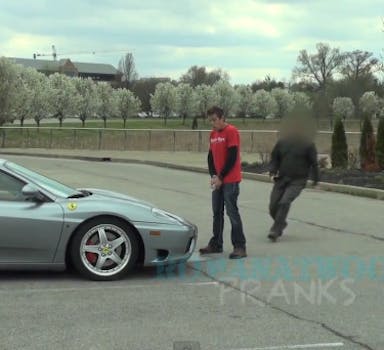 The car may not be priceless, but the schadenfreude sure is.

Roman Atwood has messed with the wrong nouveau riche dirtbag.

The popular prankster has made a name of himself on YouTube—his channel has amassed an impressive 145 million views and just over a million subscribers in the last two years—by uploading hilarious and harmless videos that show him yanking the proverbial chain of police officers. His go-to gag is to use a water bottle to make it look like he’s urinating in public. The joke usually ends with his victims laughing.

On Sunday, Atwood uploaded a new video where he pulls off the same prank. This time around, however, his victim isn’t a cop. It’s the owner of a Ferrari who parked his vehicle in a handicapped parking spot.

Unsurprisingly, the driver of the sports car did not take kindly to Atwood’s actions. The unidentified man quickly approached the prankster and began pushing him around. When Atwood highlighted that he was illegally parked, the man responded by saying “It’s a Ferrari!”

As if that statement weren’t pompous enough, he followed it up by saying that he “could buy [Atwood’s] whole family.”

According to one Reddit commenter, given the Ferrari shown in the video, this last claim is dubious to say the least.

“‘I can buy your whole family’ doesn’t sound like a statement that makes much sense from a 360 owner, ” user frankreddit5 pointed out.

“Mainly because if you were so inclined to, you could buy one used with ~20k miles for around $55k-$60k. Hell, there’s a few on ebay right now for that price. Sorry, partner, but that’s honestly not a whole lot of money.”

His car might not be priceless, but the schadenfreude certainly is.

As of this posting, the video has been viewed more than 3.7 million times.