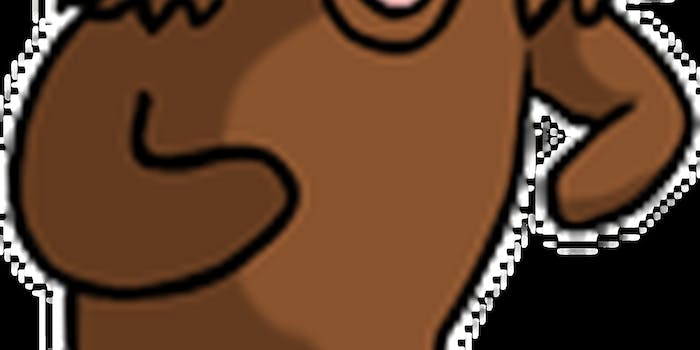 When a college student posts a picture of Internet meme pedobear in his dorm elevator, not everyone thinks it's funny.

Should you be afraid of pedobear?

The cartoon bear is an Internet meme that was born on raucous image board 4chan. Users will post a pic of the bear whenever there’s a hint of sexualizing children. It’s a joke and a warning: “You’re being creepy about a kid.”

That’s the implicit understanding in Internet culture, at any rate. But as one user of social news site Reddit  discovered yesterday, there’s a big disconnect between Internet culture and the rest of the world. Especially when it comes to pedobear.

The freshman university student, noahhk, says he purchased a print-out version of the bear and taped it behind the elevator door in his dorm building. Whenever the door closed, it revealed the bear, peeking out creepily. The intent was to pull a “harmless prank,” noahhk said.

But  noahhk’s resident director (a staff member who lives in and oversees the dorm),  clearly didn’t see it that way. The director apparently alerted the campus police who apparently searched for the pedobear online and were alarmed by what they saw, noahhk said. They checked security footage from the building, which showed noahhk as the cultprit.

So they had a little chat with him.

“They said that every officer was told to keep an eye on me, and that I was a possibly dangerous person who was to be monitored closely from now on,” noahhk wrote. “Both officers said that this was a warning, and that I would be suspected of wrongdoing (and formally charged with a crime) if anything like that happened ever again, even if I was barely even remotely involved.”

Posting the pedobear in inappropriate locations is a common prank on 4chan and other Web communities like Reddit and YTMND. It hardly indicates a predilection for paedophilia. As Web culture site Urlesque notes: “The ultimate coup for a 4chan meme is subversive or accidental use in the real world.”

A simple search on Reddit’s image section shows just how much fun redditors have with the meme.

As for noahhk, he said he can hardly sleep from worry. He’s anxious about the reactions of his peers. But looking back on what happened, he seems to have learned a lesson that’s valuable for any denizen of a Web community:

“I saw what I did as a lousy prank,” he wrote, “but one that could be misinterpreted easily by those not in the know about stupid shit on the Internet.”