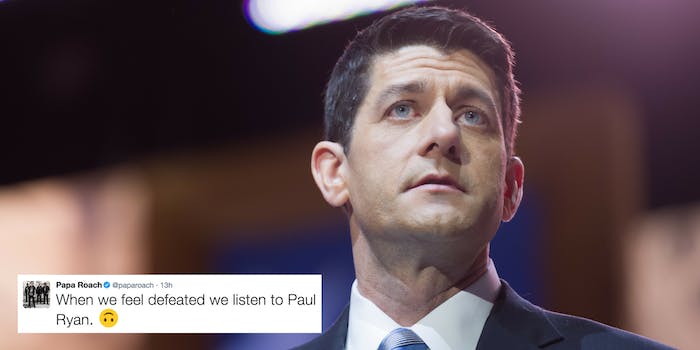 At least, that is according to a hilarious Twitter joke involving band Papa Roach that quickly spiraled out of control.

Hours after President Donald Trump announced he was pulling the Obamacare replacement from the anticipated House vote on Friday, writer Justin Halpern tweeted out a screenshot of the New York Times piece on the drama unfolding behind the scenes. It was the last paragraph that really got Halpern’s attention

ooof the kicker on this New York Times story… pic.twitter.com/YO6Wq3k5vK

“It was a stunning failure for Paul Ryan,” the story waxes. “He exited the White House in defeat and took no questions as he stepped into his black SUV. Within moments, the muffled sound of Papa Roach’s ‘Last Resort’ were heard blaring from inside the car as it drove away.”

That’s some deep, comical stuff. Ryan, listening to an alternative-metal early-2000s banger about suicide, willing the pain of the day’s defeat to just. Go. Away.

And it would have been the perfect ending, had it been true. Halpern had Photoshopped the screenshot from the original ending, which was much simpler but just as emotive:

“Ryan said the bill included ‘huge conservative wins.’ But those provisions were ultimately not enough.”

It was a bizarre moment for the circle that is media Twitter, which quickly ran with the shopped paragraph, gawking at how raw and sad our House speaker Ryan appeared to be after the day’s Republican upset. Within 30 minutes, the screenshot’s news cycle had come and gone, breaking necks at how quickly the joke had gone from ridiculous, to exposed, to overplayed and exhausted.

Please "Eternal Sunshine" my awareness of the Papa Roach thing being fake. Please. I needed it.

But that didn’t stop the amusement of the concept of the joke itself: Ryan, who had hours earlier rushed to the White House to talk about pulling the bill, now had to face the reality of a scattered party under inexperienced leadership, and he apparently could only absolve those feelings of disappointment and misery with Papa Roach’s “Last Resort.”

folks, i have video proof Paul Ryan got in his car and drove away after his health care loss while listening to Papa Roach pic.twitter.com/8Np3spTQ9P

A devastated Paul Ryan returns home, seeking comfort in a bottle of Heineken Light as he dons his cashmere bathrobe and plays some Aerosmith

Papa Roach: Cut my life into pieces@SpeakerRyan: THIS IS MY LAST RESORT pic.twitter.com/1O1n4I6CIt

The Paul Ryan/Papa Roach blip in history is the realest Fake News that ever was. Even the band caught on later that evening, with the Papa Roach Twitter account ever so subtly roasting the House speaker.

When we feel defeated we listen to Paul Ryan. 🙃

But Papa Roach also took a moment to address the song’s heavy subject matter, suicide, which in itself is nothing to joke about.

…but seriously Last Resort was written about suicide, if anyone is feeling defeated get help at @800273TALK

The kind reminder from the band only thickened the plot—compared to Ryan’s maniacal fantasy of taking healthcare away from poor people as a wee frat daddy, these papas were saints.

Papa Roach officially cares more about your health than anyone in the GOP does. https://t.co/DgYdyIVmfh

It’s almost poetic, if you think about it: darkness and depression surround “Last Resort,” its lyrics crying of a world where nothing is fine and the end to life is nigh. However, this world—this timeline in which Ryan stares out a heavily tinted window in the back seat of a black SUV, his blue eyes welling with red as a single tear streams down his cheek, “Last Resort” blasting from the car’s speakers via his Bluetooth-connected iPhone—is the only world we want to live in right now.