Sure, go ahead and give $10 to a team that was caught cheating.

Upset by the NFL‘s decision to suspend New England Patriots quarterback Tom Brady four games for his role in #Deflategate and fine the franchise $1 million? Well, you now how have the opportunity to “help.”

A new GoFundMe page aims to raise that million so cruelly levied upon the team for cheating (again). Wrote the page’s organizer:

We obviously know we won’t reach One Million Dollars, however we do believe the fine is bulls**t and want to help anyway we can. So whatever is donated will be donated to the New England Patriots in help with the fine! As we venture with this, we will do frequent updates to show progression of this! If enough is made to make the travel, we will fly down there (on our own expenses) and deliver a check in person!

As of 12:30pm CT on Tuesday, 238 people had donated a total of $3,574 to the cause. Which means that 238 people probably should have saved their money and spent it on something else. 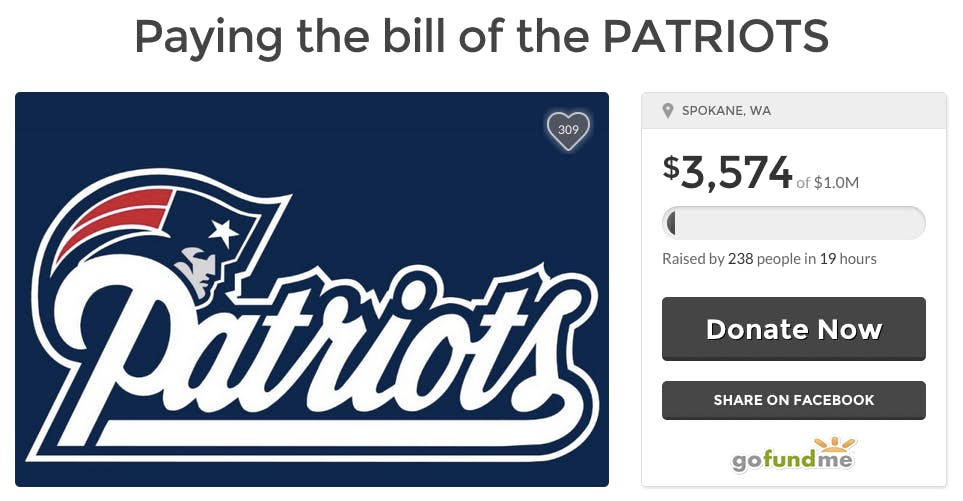 In addition to the NFL fining the team $1 million, the league also has taken away a first-round draft pick in 2016 and a fourth-round pick in 2017. By missing four games, Brady will also lose $2 million of his base salary. (So where’s his damn GoFundMe page?!)

@joshkatzowitz Couple of "Hometown Heroes" days and they could have that find paid for reeeeal easy: https://t.co/Nt9AGDoNgF

As a reminder, the NFL makes billions and billions of dollars per year, in part by making fans pay exorbitant fees for tickets, parking, merchandise, concessions, and DirecTV Sunday packages.

But sure, give the Patriots another $10 for getting caught cheating. Because in sports, if you’re not paying gobs of money to rich men who don’t really care about your wellbeing, you’re not a real fan.