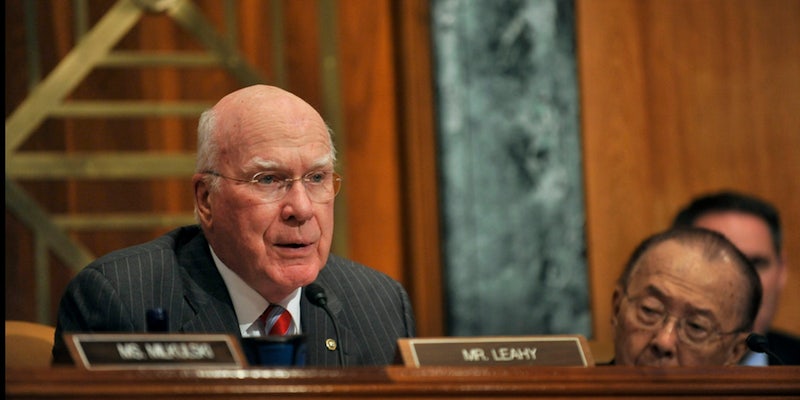 Hopes that Congress might enact patent reform legislation this year have been snuffed out.

A bill aimed at curbing abusive patent lawsuits has died in the Senate Judiciary Committee, where committee chair Sen. Patrick Leahy (D-Vt.) said there was not enough bipartisan support to get the bill through the chamber.

“I have said all along that we needed broad bipartisan support to get a bill through the Senate,” Leahy said in a written statement. “Regrettably, competing companies on both sides of this issue refused to come to agreement on how to achieve that goal.”

For several years, members of Congress have sought to deal with the problem of “patent trolls” —the pejorative term applied to shell companies that exploit current weaknesses in the U.S. patent system to demand licensing fees from other companies. It’s an issue that’s been particularly difficult on industries that depend on technology. Because of the lightning pace at which technology changes, patent trolls have been able to claim exclusive rights on popular ideas or technologies that affect entire industries.

Many of these firms never actually invented the technology they claim to hold the patent on and have never actually produced a product with their proprietary tech. Such is the case with Personal Audio, a firm that’s presently engaged in a high-profile lawsuit against podcaster Adam Carolla and his industry as a whole. Personal Audio claims to hold the patent on a technology that makes podcast distribution possible, even though they filed for this patent years after the first podcasts appeared online.

The patent troll model relies upon the high cost of patent litigation. The average patent trial defense cost $2.5 million and most companies would rather pay the licensing fees than challenge the patent holders in court. In order to deter this practice, members of Congress have, for the past several years, tried to enact legislation that would make it easier for patent troll victims to recoup legal costs.

Last year, the House of Representatives succeeded in passing—with broad bipartisan support—a bill from Rep. Bob Goodlatte (R-Va.) that would have increased the burden of proof on parties bringing patent lawsuits in order to weed out frivolous cases.

However, a companion bill from Leahy in the Senate, evidently faced heavy pressure from outside interest groups – including the pharmaceutical industry and research universities.

The Hill cites an unnamed person familiar with negotiations in reporting that Leahy’s decision to pull the bill came after Senate Majority Leader Harry Reid (D-Nev.) said he would not bring the legislation to the Senate floor for a full vote “due to objections from the pharmaceutical industry and lobby groups for trial lawyers.”

“Unfortunately, there has been no agreement on how to combat the scourge of patent trolls on our economy without burdening the companies and universities who rely on the patent system every day to protect their inventions,” Leahy said. “We have heard repeated concerns that the House-passed bill went beyond the scope of addressing patent trolls, and would have severe unintended consequences on legitimate patent holders who employ thousands of Americans.”

Though this latest turn of events is certainly bad new for patent troll victims, there is still hope. Earlier this month, the Supreme Court expanded the circumstances under which patent defendants can sue patent holders to recoup their legal cost.