Send your adversaries a ‘participation award’ for sucking at life

Looking for a way to poke fun at your friend who just can’t seem to get a break? Want to massively shade an adversary who recently failed in spectacular fashion? The search for the perfect passive-aggressive gift is over: Get them this 6-inch trophy engraved with the platitude “YOU TRIED” in capital letters, along with an official certificate of “participation.” 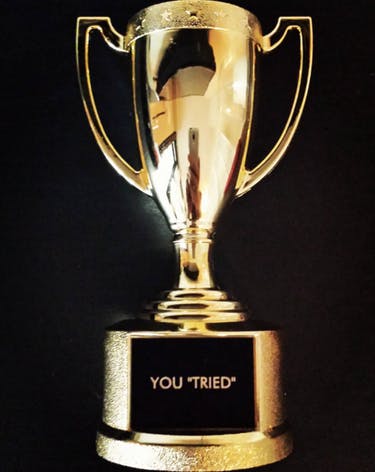 The people over at Awards Against Humanity have cooked up this sly service. For a mere $14.95 plus shipping, you can praise someone for their “mediocre effort or lackluster results.” The items are packaged in tissue paper and an unmarked box, so your victim won’t suspect a thing. You can also send it anonymously, which is great if you’re sending it to someone you actually despise. But if you’re pranking a friend, might as well let them know it was you.

In explaining their product, the site has this to say:

I decided to test out the service on one the Daily Dot’s very own freelancers, Eve Peyser. She was the original writer on this story but ended up not filing the piece because she “felt uncomfortable sending the trophy to anyone who deserved it. … I couldn’t think of a joke-y person to send it to.”

Little did she know that this would give me the perfect opportunity to send her the gag gift. I filled out the form on the website, which is pretty straightforward. You simply enter someone’s address and what they’re getting the participation award for. The next page will lead you to the order details and then the payment information.

After that, I eagerly awaited the package’s arrival. It only took four days to reach Eve’s apartment (I had help in acquiring her address from a conspiratorial co-worker who said she would be sending out holiday cards.)

“I wasn’t expecting a package, so I was confused,” she told me. But she opened up the unmarked box and found this inside:

It was, of course, the ideal participation certificate: for “trying to write this story that I am going to write.” There was even a little bit of inspiration at the bottom, with wishes for good luck in future endeavors.

This holiday season, there are plenty of gifts to get for the naughty boy or girl in your life. The participation award is definitely one you should consider. The site even suggests a few people send it to, such as your ex-boyfriend (for bad sex) and Nickelback (for bad music).

Eve says that she didn’t expect the trophy because I’m a “wily motherfucker.” That’s a compliment if I’ve ever heard one. And while she might have been the one that got gagged, the joke’s sort of on me–she’s the one who gets to keep that cool little trophy now.

Photo via Calsidyrose/Flickr (CC BY 2.0) | Remix by Jason Reed