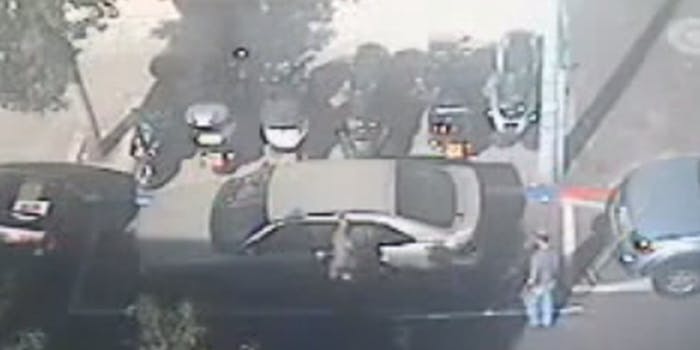 Woman framed for illegal parking gets justice with viral video

The city of Tel Aviv painted a handicapped spot around a car, then ticketed and towed it—and the whole thing was caught on video.

Mark one down in the “win” category for Tel Aviv resident Hila Ben Baruch.

After she parked her car in a legal space near her apartment in the Israeli city, Baruch came back to find the space empty and marked with a handicapped parking sign. But, being familiar with the neighborhood, she knew that it wasn’t a forbidden space.

Baruch, a student, called city hall to fight the $300 ticket, but they accused of her lying. Undeterred, she accessed security footage from the building across the street that showed city works painting lines around her car, installing a handicap sign, and towing her vehicle.

After viewing the video she didn’t whether to “cry or scream,” but she knew justice had to be served. She posted it Monday on Facebook, where it quickly was shared more than 20,000 times.

“[I live there] and know well where I can and can’t park,” she wrote, according to the Times of Israel.

Tel Aviv’s deputy mayor Asaf Zamir apologized for the mistake, but said it was legal for city works to redesignate a space while a car is parked in it as long as the owner is notified. The car can’t be ticketed or towed, though.

The fine and the towing fee have been waived, but Baruch says she’s still considering suing the city.