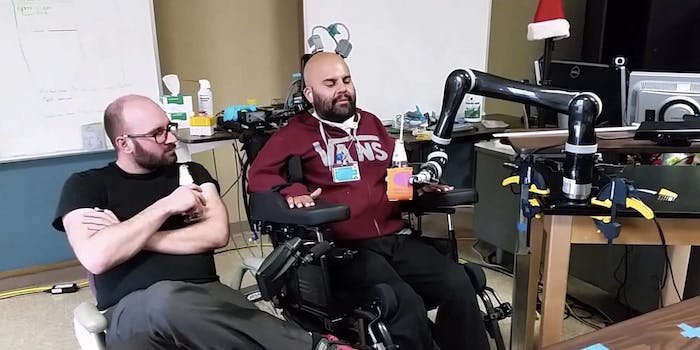 Science has done it again.

Of all the difficulties posed by being paralyzed from the neck down, not being able to raise a toast ranks pretty low. But some of the smallest joys in life are the sweetest—and sipping a beer can be a pretty big deal.

Just ask Erik G. Sorto, who hasn’t had the use of his limbs for 12 years: Thanks to a new prosthetic robot arm that he actually controls with his mind, dude can now kick back with a cold one whenever he likes.

Sorto has also used the arm to make a smoothie and play rock-paper-scissors, though the solo boozing was a special milestone.

“I joke around with the guys that I want to be able to drink my own beer, to be able to take a drink at my own pace, when I want to take a sip out of my beer and to not have to ask somebody to give it to me,” Sorto told Science.

Looks like he got his wish—and in the coolest possible way.