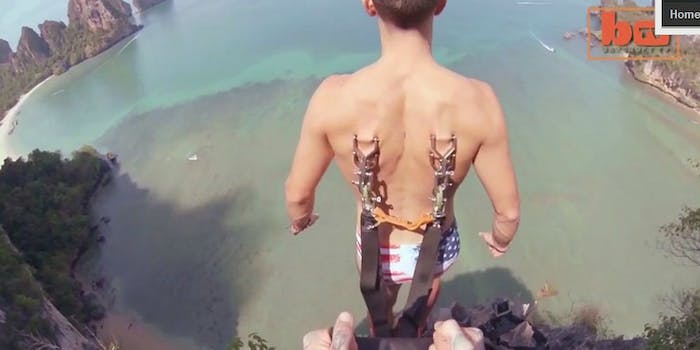 Man hooks parachute into his skin, jumps off cliff

"It's amazing how powerful adrenaline is."

If you like your extreme sports with an extra helping of piercing pain, Josh Miramant is the guy for you. That’s because the BASE jumper pierced his back with four metal canopy hooks and then attached his parachute to them before attempting a 377-foot dive off a cliff in Thailand.

In other words, Miramant attached a parachute directly to his skin and then had to hope his skin wouldn’t rip from the strain, causing him to plummet to his death. Seriously? Yeah, seriously:

Take a look at the video and try not to flinch.

So, why exactly would you do this? Especially when, as the video’s narrator explains, Miramant was relying on his flesh to withstand the pull of the parachute? The rush of it all, I suppose.

As Miramant—who said the piercing took about 20 minutes to complete—explained, via the Daily Mail, “I was shocked that when the canopy opened, it was not very painful at all. It’s amazing how powerful adrenaline is—as the canopy made a loud snap above me, it triggered one of the strongest adrenaline kicks I’ve ever had. At that point, I just had to steer the canopy towards the ground and it was over. The delight, relief and satisfaction of success was far more prevalent than pain.”

Sure, this doesn’t look painful at all. 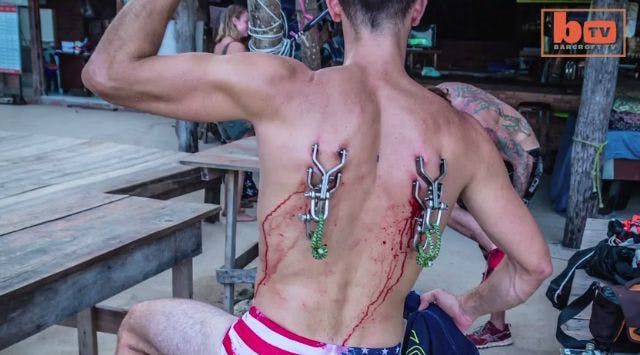