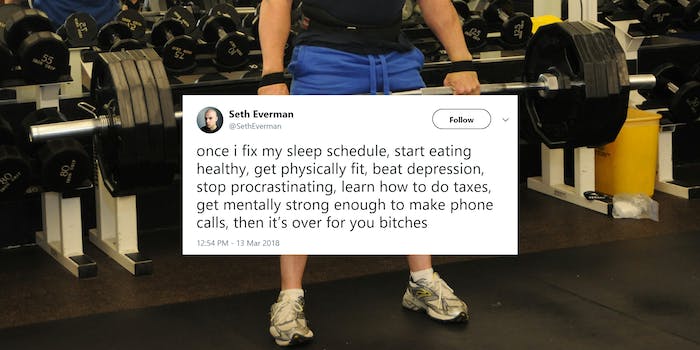 Once I learn to start meal prepping and get 8 hours of sleep a night...

There’s nothing that captures the striving, hustling, stressed-out lives of young people in 2018 quite like ‘it’s over for you bitches.’

The phrase has become a hugely popular way of describing one’s goals, dreams, and daily troubles. As in, “Once I achieve my life’s ambitions, or even become able to function, it’s over for you bitches.” Fill in whatever you’re fighting to accomplish, no matter how lofty or quotidian, and you’ve got the hang of this meme.

It’s difficult to determine where “it’s over for you bitches” first started, but it’s entered the vernacular recently thanks to a handful of popular tweets. Taken as a whole, they form a meme based on identifying one’s own flaws and aspiring to overcome them.

once i defeat the chemical imbalance in my brain, its over for you hoes

The original “it’s over for you” boom hit in November 2017—although there are examples on Twitter going back years. The meme recently reemerged thanks to this viral tweet by popular YouTuber Seth Everman:

once i fix my sleep schedule, start eating healthy, get physically fit, beat depression, stop procrastinating, learn how to do taxes, get mentally strong enough to make phone calls, then it’s over for you bitches

Now everyone’s ready for their big “glow up,” or at least ready to talk about all the work they’d have to do to make it happen. As Everman’s litany of challenges suggests, defeating the unnamed “bitches” in your life is much easier said than done.

Overarching themes of the meme include mental health …

When I find the will to live it’s OVER for you bitches.

When I stop having 16 mental breakdowns a day, it’s over for you bitches.

Do any of these people even have haters or doubters they need to prove wrong? Probably not, but setting up a metaphorical opponent can be more motivational and more manageable than facing up to your worst hater: yourself. That’s what makes this such a good and relatable meme—it’s funny and self-deprecating, but it’s also putting one’s struggles out into the world, where friends and followers can empathize and offer support.

Once you get a few likes and don’t feel so alone in your challenges, it’s over for these bitches.