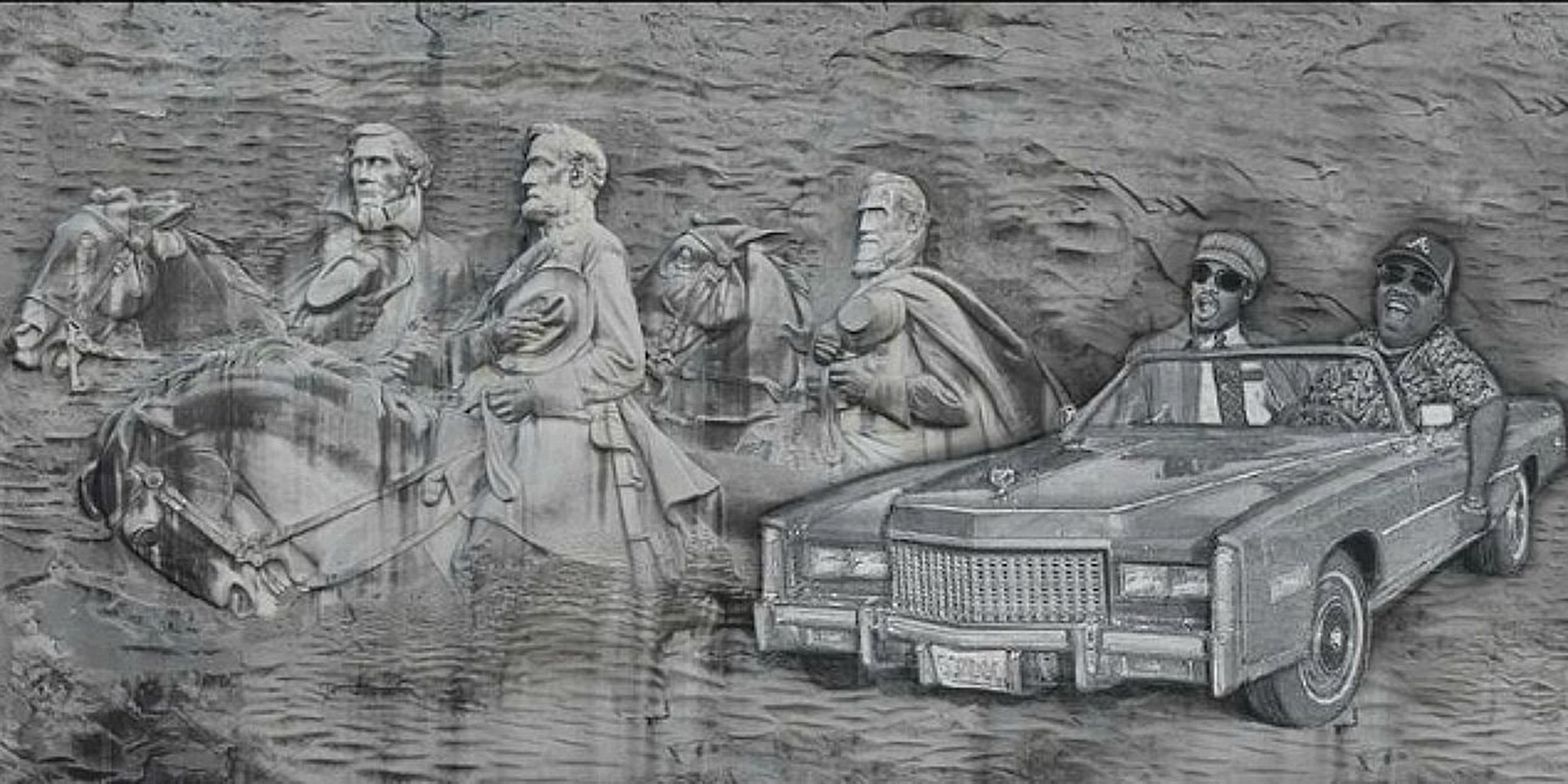 This animator's Outkast idea is so fresh and so clean.

Stone Mountain has been an important part of Atlanta’s culture since the early part of last century, and the main showcase of the enormous igneous rock is the bas-relief sculpture of Jefferson Davis, Robert E. Lee, and Stonewall Jackson riding on horses with their hats solemnly held over their hearts.

Here’s the iconic image of the Confederate generals, which holds the world record as the largest bas-relief sculpture, as it’s seen now. 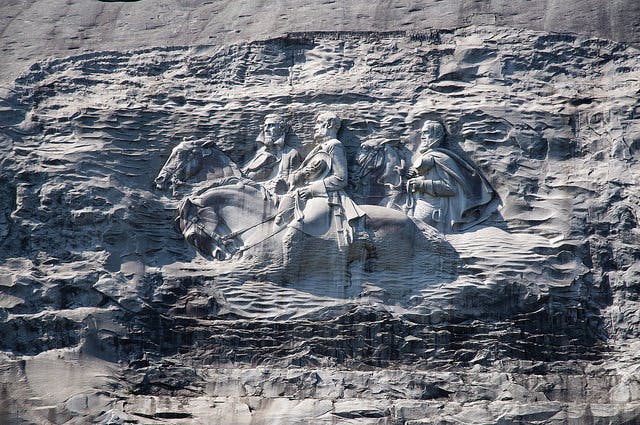 The Atlanta chapter of the NAACP wants to change it—sandblast the sculpture directly off the mountain, in fact — but New York artist Mack Williams has an even better idea. He doesn’t want to erase any of the history. He wants to add to it.

He, in fact, wants to insert Atlanta natives Outkast to the sculpture. That’s why Williams—originally from Blackshear, Georgia, about 100 miles southwest of Savannah—cobbled together, on a whim, a MoveOn.org petition that calls for hip-hop legends Outkast to be carved into the mountain.

“By no means do we wish to erase or destroy the current carving, which, regardless of its context, is an impressive and historic work of art. We simply wish to add new carvings, of Atlanta hip-hop duo Outkast, to the mountainside. There’s plenty of room,” the petition reads. “I believe that Daddy Fat Sacks and Three Stacks should be carved riding in a Cadillac (as is their wont). This will help the new carving blend nicely with the Confederates who are on horseback. Outkast are two of the greatest Georgians in the history of our state. It’s about time the Empire State of the South paid proper tribute to them, while also improving a great monument and tourist attraction.”

As of Thursday afternoon, the petition had amassed 5,049 signatures.

“I thought it’d be really funny if 100 people signed it,” Williams, an animator who worked on the first few seasons of Archer, told the Daily Dot. “I thought it’d be hilarious. Last time I checked it was over 4,000, which is insane. It’s silly. It’s satire, but clearly, it touched a nerve and spoke to a lot of people.”

Full disclosure: Williams and I attended college together, and I’d consider him a buddy.

Although adding two iconic rappers to the sculptures might not have appealed to the three generals, there’s little question that Big Boi and Andre 3000 from Outkast are some of the most talented musicians ever to emerge from Atlanta. They have an appeal in that city that’s hard to describe, and Williams said he can’t think of anything else that transcends race and class in Atlanta.

And Big Boi is on board with the idea.

Williams had no idea his petition would go viral. He floated the idea on a fellow animator’s Facebook page, and after he received a few positive comments, he posted the petition on Wednesday. The idea started to gain traction, and Greg Bluestein, a political reporter with the Atlanta Journal-Constitution, told him he was going to write a story for the newspaper’s politics blog and asked Williams if he had an artist’s rendering of how it would look.

“If I knew it was going to blow up this big,” Williams said, chuckling, “I would have spent more time on the Photoshop.”

But his illustration has also provided Williams an education.

“The one thing that’s been unexpected, aside from it going viral, is the insight into the conversation that probably does need to be had about it,” Williams said. “One of the negative side effects is that I’ve been exposed to a lot of gross and terrible comments from really terrible people saying super-racist things. I was surprised.

“But I also grew up in south Georgia, and I thought, ‘What did I think was going to happen if I suggested we add two black people to Stone Mountain?’ South Carolina was flying the Confederate flag, and there was an easy solution. Take it down; don’t do it anymore. With Stone Mountain,  you have a technologically amazing artistic thing that represents this really awful thing, and it’s the size of a football field. What do you do?”

Williams, for his part, doesn’t really believe Outkast should be carved into the igneous rock. Off the top of his head Thursday, he suggested that perhaps carvings of civil rights leaders like Martin Luther King, Andrew Young, and John Lewis marching would make a good compromise. But Williams is no expert on the matter. He was just an artist trying to score a few Twitter retweets.

“It’s such a complex issue, and I was just trying to make people laugh,” he said. “But some people have taken it very seriously. That’s the weird and disturbing part of it all.”