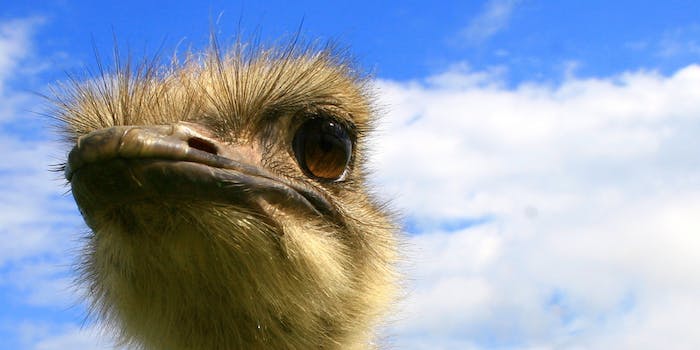 Cyclists freak out when a huge ostrich starts chasing them

Their workout was a little more intense than they expected.

The Cape Town Tour, otherwise known as the Cape Argus Tour, is one of the biggest bicycle races in the world, with roughly 35,000 cyclists racing 109 kilometers across South Africa. The race attracts some tough competitors, but even these guys must have freaked out a little when they went for a pre-race ride and ended up getting chased by a giant ostrich.

Oleksiy Mishchenko managed to capture this video of the huge bird that appeared out of nowhere to show a cyclist a thing or two about speed. Mishchenko wrote that his group was out to “stretch their legs” on a fairly deserted stretch of road when their surprise visitor showed up.

Suddenly, I spotted a white ostrich on my left, then this beast jumped on the road from the right and started chasing my friends! It was a little scary at first, but then I thought I gonna fell of my bike from laughter. The ostrich didn’t have any problem to keep up at 50km/h and apparently they do 70km/h with no sweat.

Eventually the ostrich grew tired of the game—or just plain tired—and abandoned the chase. Mishchenko theorized that it was trying to show off for its girlfriend. “I bet she was very impressed,” he wrote in the video’s description.