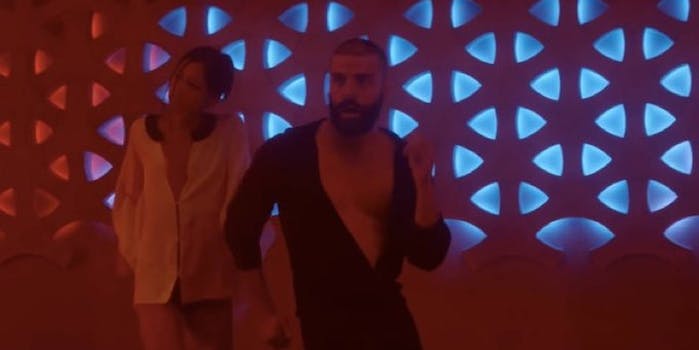 In context, this meme is a horror show.

Everyone loves Oscar Isaac, “the Internet’s boyfriend,” who has a cute dog and acts aloof about what a “meme” is. Most recently, Isaac stans have fallen for a Twitter account that sets his dance from the film Ex Machina to various pop songs. The results are cute and funny… unless you’ve actually seen Ex Machina.

@OscarDances has been described by various outlets as “hilarious” and “five fire emojis,” which is unsettling given the context. Spoiler alert: Isaac’s character, ur-tech-bro Nathan, is in complete control of his android dance partner Kyoko (played by actress/model/ballerina Sonoya Mizuno). The ethical issues presented by a rich, egomaniacal dude playing god with robot women make up the creepy heart of the film. They also provide the setup for its gut-wrenching ending.

So, sure, the surface joke—Oscar Isaac dances to “Cotton Eye Joe,” lol!—is pretty funny when divorced from its context. “Robot rapist Nathan Bateman dances to ‘Cotton Eye Joe’ with one of his victims, who doesn’t really have a choice,” is less funny. In fact, it’s borderline creepy.

Dancing is basically the only way we see controlling narcissist Nathan chill out in the movie—and even while dancing, he’s controlling and narcissistic. (As an aside, I’d forgotten the character’s last name was Bateman. Could that have been a slick American Psycho reference by writer/director Alex Garland?)

Presumably, everyone celebrating the meme has seen the movie but isn’t too worried about the implications of the scene. Perhaps it’s because of how blindingly hot Oscar Isaac is and how goofy his moves are when separated from the rest of the film?

Maybe the appeal is in juxtaposing the dark scene with lighthearted, mismatched music. That tension between laughter and discomfort is what makes comedy work—a lot of the time. But that’s why it worked in the movie, too, and why it made us laugh in spite of ourselves.

What does that say about recapitulating Ex Machina’s dark joke on Twitter as a tribute to Oscar Isaac, but minus the darkness? Just a further layer of complication for a story full of provocative, unanswered questions.

Fortunately, it looks like we, as a people, have decided on one takeaway from this complex allegory: Oscar Isaac can get it.