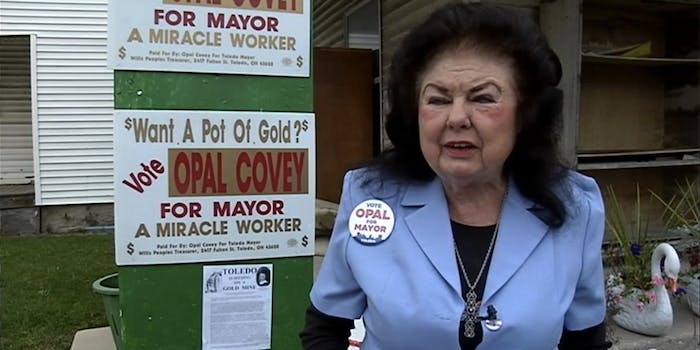 She wants to fix potholes and bring an amusement park to town.

You know what they say—fifth time’s the charm.

Opal Covey of Toledo, Ohio, is running for mayor. She hopes to fix the city’s potholes, get rid of corruption in city government, and build amusement parks that’ll help spark Toledo’s economy. Oh, and she’s also a self-proclaimed prophetess who has run for mayor four times already. She claims that her votes in previous elections were stolen.

When asked at the end of an interview with NBC 24 if she’d like to add anything else, Covey said that “great destruction will come” and began to speak in tongues. Once she was done with that, she said,  “Thank you, Jesus. That was a confirmation, if people don’t give me what I earned in 2013 back, and I’m not on that seat in November, then you’ll see God visit the city in the greatest destruction you’ve ever seen.”

You can also check out her YouTube channel to hear more of her thoughts and lessons about religion.