The satirical newspaper called the young actress "a c**t," and Twitter was not amused.

Look, The Onion, we all know you’re edgy and satirical and usually very funny.

A tweet sent during the Oscars ceremony regarding 9-year-old Best Actress nominee Quvenzhané Wallis went a little too far in the eyes of some, however. 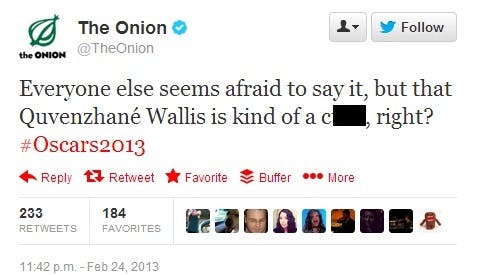 Not exactly the kind of word you’d normally associate with a 9-year-old, even as a joke. The tweet was deleted within an hour of its posting.

Tweeters were quick to call out The Onion on its choice of language, with many criticizing the satirical publication as “disgusting,” “abhorrent,” and “tasteless.” Several called for whoever wrote the offending tweet to be fired, and at least one linked to the contact page for the publication so people could voice their concerns somewhere other than Twitter.

An hour after the fateful tweet, people were posting dozens of tweets per minute criticizing it for the message. We’ve reached out to The Onion for comment and will update this story if we hear back.

Update: At 11:41am ET—a full 12 hours after the tweet was sent—Onion CEO Steve Hannah posted a mea culpa on Facebook.
He apologized to both Wallis and the d the Academy of Motion Picture Arts and Sciences over the “crude and offensive” tweet, noting that it was “inconsistent with The Onion’s commitment to parody and satire.”
Hannah added that The Onion has established “tighter” Twitter policies to “ensure that this kind of mistake does not occur again” while those responsible are being disciplined. 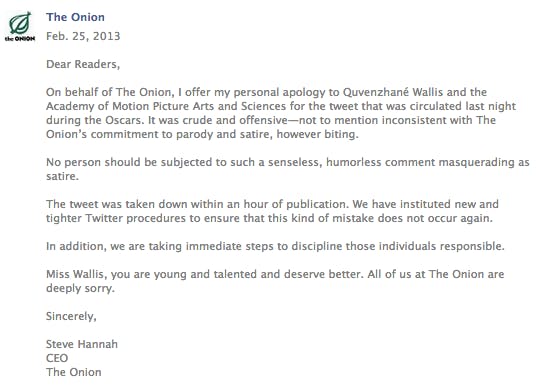