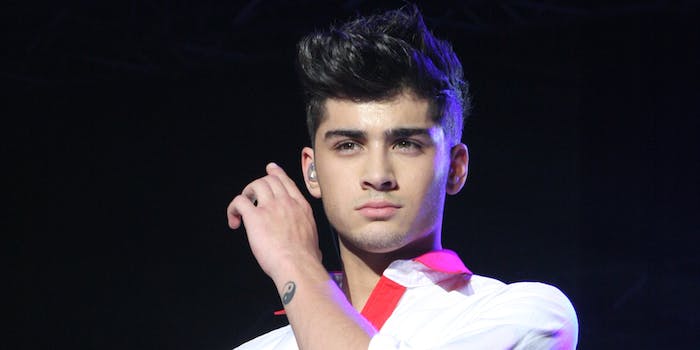 Can you tell the difference between this guy's parody vine and a real One Direction fan?

For many teenagers, Zayn Malik’s departure from One Direction is the greatest tragedy of our era.

His doe-like eyes will no longer grace the pages of the One Direction calendars, his beautiful yet surprisingly high-pitched voice will no longer join his four bandmates on the next album, and his razor sharp cheekbones will be hidden away from the paparazzi. In short, we are a world in mourning.

The Internet is currently flooded with tearful young people sharing their One Direction emotions with the world, giving TV news channels ample opportunities to make fun of their dramatic reactions. But this strategy backfired when CBS News aired a fake Vine reaction by mistake.

The vine in question was from Ben Berst, who posted a joke clip of himself weeping and crumpling up a photo of Zayn Malik.

The video is just ridiculous enough that you can tell it’s a parody, but CBS didn’t seem to pick up on the joke. Instead, they aired it as part of a segment about 1D fan reactions.

To be fair to CBS, there’s a fine line between this Vine and the real deal. But the mistake is still pretty funny, and CBS probably got what it deserved for making fun of innocent (if ridiculous) teenage emotions.