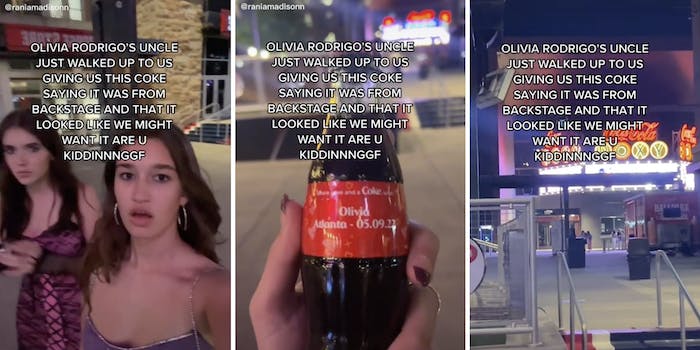 ‘Are you kiddinnngg?’: Concert-goer says Olivia Rodrigo’s uncle gave her a Coke that was backstage. The special bottle looks legit

'It would make sense.'

Olivia Rodrigo is currently embarked on her Sour World Tour and thousands of her adoring fans have posted about going to the concerts. On a recent stop in Atlanta, one TikToker said that Rodrigo’s uncle gave them a bottle of Coca-Cola with a commemorative design.

In the video, the creator films herself stunned with text overlayed that said, “Olivia Rodrigo’s uncle just walked up to us, giving us this coke, saying it was from backstage and that it looked like we might want it. Are you kiddinnnggf?” She then records the bottle that says “Olivia, Atlanta, 5.09.22”

Her video was viewed over 354,000 times and over 48,000 people liked the video. The comments section was filled with some people that were excited for her but a lot of people were skeptical.

“How do you know that was her uncle?” one person asked. The creator wrote a pinned comment that said, “Guys [I know] it’s her uncle because Olivia was telling us about how her family was backstage & at the show & the guy was Filipino, and so is she so it would make sense.”

Some people warned that either way, she shouldn’t drink anything handed to her by strangers, while others were surprised to see a Coca-Cola bottle because many thought she might have been talking about cocaine. “I THOUGHT U MEANT-,” one person wrote.

The Daily Dot reached out to the creator for comment, and to a representative for Rodrigo.