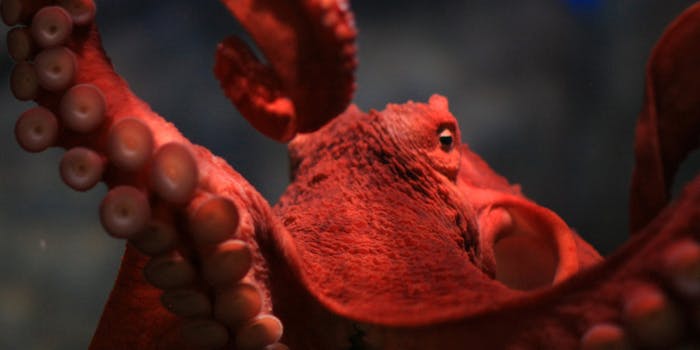 Imagine getting ready for a romantic Valentine’s Day love-making session only for it to to be cancelled—not due to bad weather or a lover’s spat, but because some people are concerned that you might eat your companion. The nerve, right?

Well, Feb. 14 didn’t turn out quite as planned for a few octopi at the Seattle Aquarium that were scheduled for some sexy tentacle-tangling. Cannibal concerns prompted officials to cancel the rendezvous.

The normally scheduled Valentine’s Day octopus mating ritual was scrapped due to fears that the male, a 70-pound sack of brawn named Kong, was too big for the 30-to-40-pound ladies and that he might eat them.

Instead of doing the nasty and having some dinner, Kong spent the holiday hanging out with divers and helping teach visitors about the life of a bachelor octopus.

If it’s any comfort, this isn’t the first time we’ve heard about this sort of lethal quickie. In 2014, Scientific American highlighted a paper that included observations of female octopi strangling their mates with just three tentacles.

As for Kong’s fate, he’ll be released back into Puget Sound on Monday. Whether he finds love and a meal in the wild—well, that’s some romance he’ll have to chase.