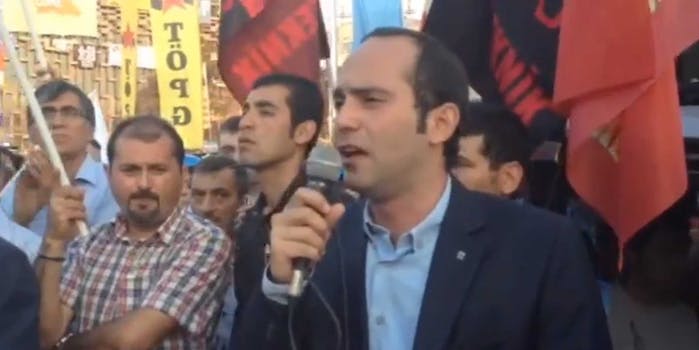 One week after thousands of citizens took to the streets of Istanbul, Turkey to protest the bulldozing of Gezi Park and the government of Prime Minister Recep Tayyip Erdo?an, a solidarity group associated with the Occupy Gezi movement has issued a list of demands.

The list of demands contains five items that address the future of Gezi Park, the right of citizens to demonstrate peacefully without fear of police brutality, and the responsibility of the national press to cover the protests. As the Daily Dot reported yesterday, the Turkish edition of CNN aired a documentary on penguins, forcing dissidents to use social media platforms like Facebook and Twitter to get word out.

TO THE PEOPLE AND THE GOVERNMENT!

1. Gezi Park will be preserved as it is. It will not be exposed to any further works under the name of a barracks, mall, residential area, or museum, etc.

2. Unarmed and non-violent citizens who are congregating to exercise their constitutional rights will not be exposed to police violence. Those arrested for exercising these rights will be set free. All political, bureaucratic or public staff who have given the order to attack demonstrators exercising their right to assembly, those directing the attacks, and those individuals applying the violence, should be prosecuted in line with relevant legislation.

3. The main aim of the government’s privatisation and environmental policies is to monitor public profit. So that they may benefit the citizens of Turkey equally, the transfer, sale and renting out of public spaces, beaches, waters, forests, streams, parks and urban symbols to private companies, large holdings and investors will end.

4. Democracy does not consist only of going to the ballot box to cast a vote. Democracy guarantees the state itself as every group among the people expresses its needs and complaints without experiencing fear, arrest or torture. This resistance is a struggle for freedom of expression and freedom of thought. Those who want to save the park today have received the same treatment as those who advocated the headscarf yesterday. The Gezi Park resistance refuses every type of oppression.

5. We have seen the television channels, newspapers and news websites whose professional duty is to protect the public good and relay correct information have neglected for days this country’s citizens, youth and elderly who have been coming to Taksim’s Gezi Park to exercise their constitutional rights in a peaceful manner. For the media to have announced our resistance to the people on its fourth day is to disregard their professional duty. In this we call on the media—and especially the media patrons who owe their wealth to the people—to act in an ethical and professional way.

Footage of Tayfun Kahraman addressing the media was also uploaded to YouTube by news organization Bianet.org.

Aside from making demands, Taksim Dayan??mas? implored protesters to continue the occupation of Gezi Park until the fate of the park was decided. The collective also asked dissidents to refrain from “vandalism, swearing, alcohol, and destroying the environment.”

Most importantly, Taksim Dayan??mas? asked that demonstrators continue to use social media platforms to “respond to the newspapers, television channels and news websites spreading false news to show the government is in the right.”