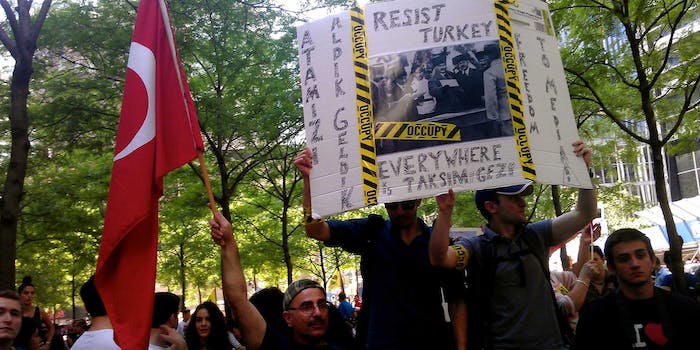 Supporters donated $60,000 to buy a full page in the NYT for the Turkish people.

It took Turkish protesters less than a day to raise $63,890 online for a full-page ad in the New York Times.

It’s been a confusing whirlwind of conflict in Turkey since May 27, when protesters occupied Istanbul’s Gezi Park to protect it from being replaced by a mall and were quickly embroiled in violence with police. That confusion has been multiplied by a near-blackout of the subject on traditional Turkish media, leaving Turks and the rest of world to scramble to social media for explanations.

But now, thanks to a phenomenally successful Indiegogo campaign, a coalition of protesters will get to explain with a full spread on page A2 of America’s most decorated newspaper.

As of Monday afternoon, the text of the proposed ad reads, in full:


From the Turkish People to their Government:

The violent response to a peaceful protest to save Istanbul’s Gezi Park symbolizes an autocratic government’s increasing encroachment on the civil rights of the country’s citizens. We hope for new dialogue—one that can restore the trust of Turkish citizens in a government that positioned Turkey as a global economic power, but which is now getting recognition around the world for condoning harsh police retaliation that strikes at the pillars of democracy.
This is not just about a park

Before the park came the the arrests of journalists, elected officials, laws restricting the sale of alcohol, systemic de-secularization of future generations through Islamification of school curricula. The plans to demolish Gezi Park despite public opposition and the subsequent police brutality directed at demonstrators finally sparked the reaction against Recep Tayyip Erdoğan’s decade-long rule. The demonstrators are from different ideological, religious and socioeconomic backgrounds. They are young, old, religious, secular, gay, straight, foreign, domestic, fringe, mainstream, anarchist, women in headscarves, women in tank tops, Alevi, Sunni, Jewish, and Christian. This is Turkish Democracy in action.

This would not have happened had it just been the park. Protests are to no avail. In a true democracy, citizens can question and amend government initiatives.

This wouldn’t have happened had the Turkish government not used excessive teargas, plastic bullets, tanks, helicopters and physical violence to crush the peaceful Gezi park protesters. A true democracy allows for protest and does not use excessive violence against its citizens.

This would not have happened had the big Turkish media channels covered the riots from the start. Unfortunately there are strong ties between media outlets and the government. This is why Turkish protesters use social media to seek the attention of foreign media. In a true democracy, media is independent and reports in a balanced way on events happening.

Despite the fundraiser reaching its goal, money is still pouring in. Right now, organizers are asking for two more things: High-resolution photos they can use in the ad, and ideas for what to do with the extra money.

“Absolute genius! Congratulations!” commented Mehmet Saydam, who gave an unspecified amount. “Every little bit helps but this one is big!”