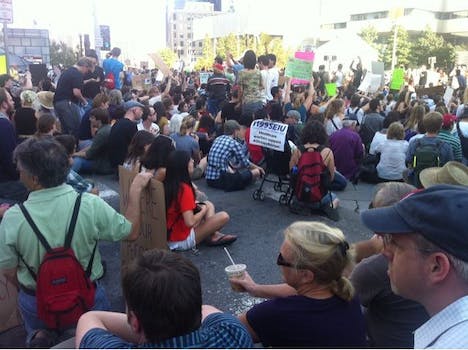 Wall Street may be where the Occupy movement began, but a police crackdown on protesters in Boston is now the talk of Twitter.

More than 100 Occupy Boston protesters were arrested Tuesday morning, in one of the biggest crackdowns since the Occupy Wall Street movement began spreading to other cities a month ago.

The arrests in the northeastern U.S. city reached Reddit’s front page, where thousands of people have shared their support, photos, and information about the arrests. On Twitter, Occupy Boston became a trending topic late Monday night, and has been mentioned more than 8,000 times since 1 a.m. Tuesday, according to statistics from Topsy, a social-media search engine.

Last night’s protest is part of the nationwide movement that started in Wall Street, the symbolic heart of the U.S. finance industry, last month, and then spread to Washington, D.C., Austin, San Francisco, and other cities across the nation. The demonstrations aim to bring attention to the excesses of big banks and social policies that favor the wealthy, according to many protesters.

Early Monday afternoon, students, veterans, and families descended on North Washington Bridge, Boston Common, and Dewey Square Park to protest, according to an Occupy Boston website. Police approached with “batons drawn, assaulting protesters” and arrested more than 100, said the website. According to reports in USA Today and on Twitter, some protesting veterans were pushed to the ground by police.

The Boston Police Department says that they gave the protesters, especially those who were camping around the city, warnings, reported the Boston Globe.

And while Reddit has been largely supportive, dozens of people on the social news site displayed that community’s trademark skepticism in contesting claims of police brutality.

“Cops may get aggressive when people refuse to move (especially if they’re somewhere illegally), but they usually are pretty calm until people attack them, physically or verbally,” wrote PosterPal. “Then they defend themselves against the mob that the attackers are hiding in.”

“Claims of police brutality are pretty serious. Do any of you have proof? A photo? A video? Anything other than an eyewitness?” wrote LennyPalmer. “A coordinated attack of thousands of camera-phone carrying internet savvy citizens across the entire country should probably produce some evidence. If I don’t see any I will simply not believe it.”

Redditors and many people on Twitter believe that last night’s crackdown was part of a coordinated police effort to stop the protests across the U.S. According to reports out of Seattle and Dallas, police forces in these cities told protesters to leave the parks and streets they have been occupying. While these police movements occurred about the same time as the Occupy Boston arrests, there has been no credible evidence that the crackdowns were coordinated.

While the protesters in Boston have been shaken, they are not deterred in their mission against what they view as corporate greed.

“Despite the city’s attempt to silence us, Occupy Boston remains, and bears no ill will towards the men and women of the Boston Police Department who were simply following orders,” read a statement posted by activist Jason Potteiger on the Occupy Boston website. “We hope that someday the peaceful pursuit of economic justice will not provoke the beating of elderly veterans and the arrest of medics and legal observers.”