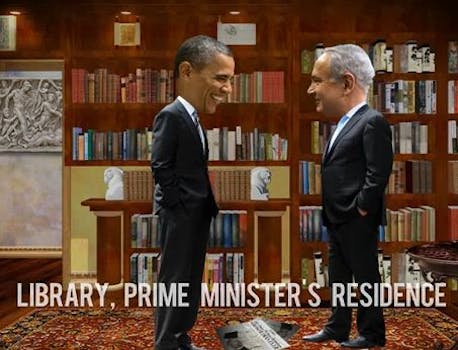 This video from the D.C. Israeli embassy is totally weird

But is it intentionally bizarre or just out-of-touch?

The Israeli embassy in D.C. has posted a video, and it’s a weird one.

Apparently a “trailer” for Obama’s upcoming visit to Israel, the first in his presidency, the video is a slumgullion of out-of-phase pop culture references, random scene changes, and clashing visual styles—not at all what you would expect from a diplomatic product.

The video’s South Park-meets-Next Media animation, Golden Girls theme music, sudden and terrifying high-fiving and sexual tension (are they going to kiss in the library?) is all enough to lead the casual viewer to a mental state of “what is this I don’t even.”

In her article on TechPresident, Lisa Goldman, a Canadian-Israeli journalist who has spent over a decade living and working in Israel, puts the video in context of frenzied preparation in the country for Obama’s visit. But she summed up her feelings on the … less than traditionally diplomatic video succinctly for the Daily Dot.

“It’s pretty insane. But this craziness has been a pattern for a while.”

A social media specialist who works with diplomats, and who wishes to remain anonymous, told the Daily Dot she sees the video as part and parcel of Israel’s overall diplomatic social media strategy.

“Part of the reason governments seek a presence on social media is to aid in nation-branding,” she said. “Governments want to be seen as ‘cool’ and ‘fun’ because that often translates to being approachable and friendly. Governments who use humor in their communications are often seen as more likeable.”

When you think about it, perhaps the cuckoo-bananas video sums up the farandole-in-hell state of affairs in the small Middle Eastern country better than any slick, over-produced promotional video ever could. Maybe this video is a coherent part of an incoherent whole, reflecting the psychological stress of Israel’s attempt to reconcile its place in a hostile region in much the same way that “Monsieur aa the antiphilosopher sends us this manifesto” reflected the displacement of the European mind in the long shadow of the First World War.