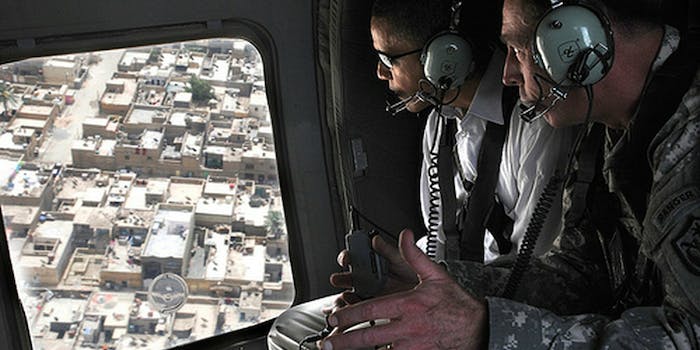 Most American troops will pull out of Iraq by the end of the year, Obama announced today. Mission well, not exactly accomplished.

By the end of the year, Dec. 31, almost all American troops would be withdrawn from Iraq, President Barack Obama announced this afternoon before the White House press corps. A small group of just 150 soldiers will stay behind to protect national interests, he said. This, Obama said, will fulfill his 2008 campaign promise.

“Over the next two months, our troops in Iraq—tens of thousands of them—will pack up their gear and board convoys for the journey home. The last American soldiers will cross the border out of Iraq—with their heads held high, proud of their success, and knowing that the American people stand united in our support for our troops. That is how America’s military efforts in Iraq will end,” the president said.

News quickly spread across the Internet. Within an hour ‘Iraq War’ and ‘Mission Accomplished’ were trending on Twitter. There were more than 11,000 mentions of the war shortly before noon Friday, according to Topsy.com,

Reaction to the news was mixed, however, with some people using it as an opportunity to criticize former President George W. Bush or write that it was politically motivated going into an election year. Others were just happy the decades long conflict was coming to an end.