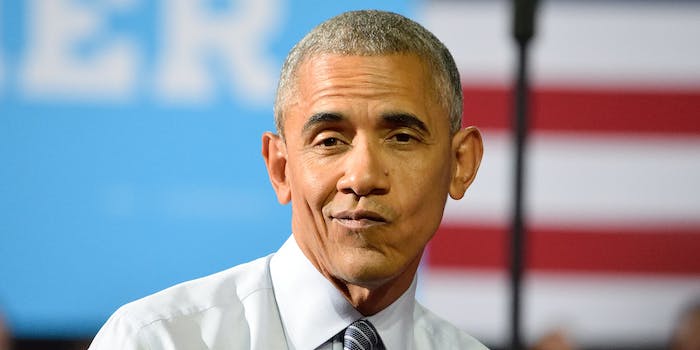 Was Obama a pick-up artist in college?

'As a strategy for picking up girls, my pseudo-intellectualism proved mostly worthless,' he writes in his memoir.

Former President Barack Obama dropped his new memoir, A Promised Land, yesterday. But after people on Twitter are taking notice of his pick-up artistry in college, it would perhaps be fairer to dub it A Problematic Land.

Obama, who was president of the United States for eight years, for some reason devoted a section of his memoir to his proclivities in college for picking up women and how he would shape his reading material around it.

“Looking back, it’s embarrassing to recognize the degree to which my intellectual curiosity those first two years of college paralleled the interests of various women I was attempting to get to know: Marx and Marcuse so I had something to say to the long-legged socialist who lived in my dorm. Fanon and Gwendolyn Brooks for the smooth-skinned sociology major who. never gave me a second. look; Foucault and Woolf for the ethereal bisexual who wore mostly black. As a strategy for picking up girls, my pseudo-intellectualism proved mostly worthless; I found myself in a series of affectionate but chaste friendships.”

Put most importantly, was Obama a pick-up artist? Now, to be fair, in the 1980s, when Obama graduated college, this behavior towards women wasn’t considered inappropriate, but in the refracted light of the late 2010s, it’s hard not see Obama painting himself as the guy who’d do anything to get in your pants in college.

And while he probably didn’t mean it (it’s doubtful he had a copy of Neil Strauss’ The Game on the Resolute Desk), the use of the phrase “strategy” puts him firmly in the realm of pick-up artist.

And it also makes him sound like kind of an incel.

And if you think it’s ridiculous to judge Obama for these actions decades ago, well he was the one who wanted to write about it that way.