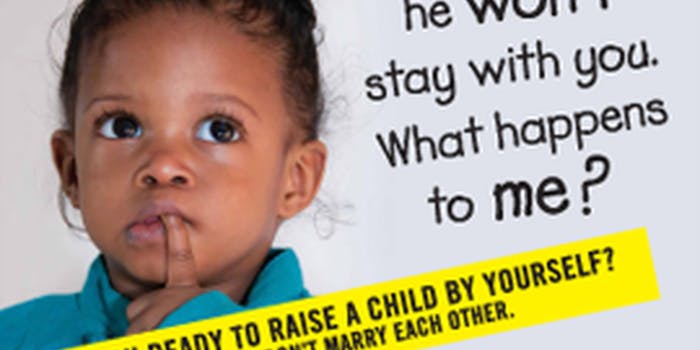 A mobile game launched as part of a New York City campaign against teen pregnancy is attracting critcism for shaming pregnant teens.

New York City launched a new teen pregnancy prevention campaign this week—and it includes a bizarre choose-your-own-adventure mobile game that scolds girls for getting pregnant by calling them “fat.”

The NYC Human Rights Administration’s new campaign, featured at bus stops and subway stations across town, pulls out all the stops in delivering “real talk” to New York teens: crying, surly looking babies admonish future parents that in all likelihood, their children will have deadbeat dads, they will be more likely to end up living in poverty, and they’ll be paying thousands of dollars in extra expenses for the next two decades of their life. 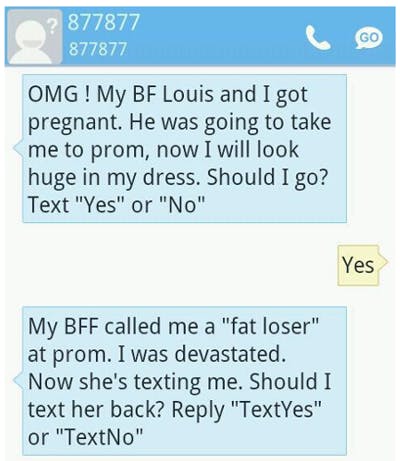 The New York Daily News called it a “shame campaign,” while the Village Voice noted that it was likely to “scare the living daylights” out of its intended audience—which, perhaps, was the point.

But fewer people are talking about the bizarre shame aspect of the ad campaign’s mobile side, as demonstrated by Miriam Pérez at Reproductive Health Reality Check. When Pérez followed instructions and texted “NOTNOW” to 877877, she embarked on a strange “game” that allowed her to run through a scenario that shamed her female character, “Anaya.”

As Pérez played the game, she stated that “it only got worse, with more scenarios about Anaya being ignored by her ‘baby daddy’ and shunned by her parents.”

None of the texts included any actual information for teens trying not to get pregnant—they just used an invented scenario to drive home the idea that teen pregnancy results in social isolation and losing your boyfriend.

Unless you can score “3rd” or higher, each scenario ends with Anaya and her boyfriend Louis breaking up, and Anaya ending up a single, unwed mom on her own. At one point during the game, you have the options of either screaming at your parents (because they’re mad at you for getting pregnant), or going to your room to cry. 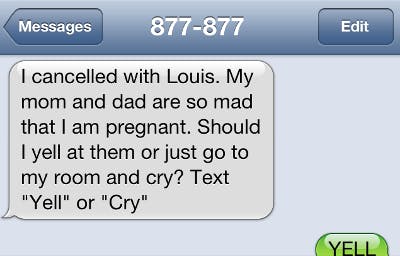 The game also rewards you for choosing to stay home instead of dragging your “huge” self out to the prom with Louis, and allows you to “win” the game only when you’ve thrown up  all over all your old friends, broken up with your boyfriend, and focused on getting a college degree by yourself.

At no point in the scenario is “Anaya” given the option of having an abortion, nor is she ever able to discuss her options with the elusive Louis, who avoids her, then dumps her when she doesn’t go to prom with him.

“The messages sent by these ads and the ridiculous SMS game make it seem like the HRA is fine with the status quo of shame and isolation for teen parents,” writes Pérez.

“A pregnant teen gets called a ‘fat loser’? ‘Well, she shouldn’t have [gotten] pregnant!; the campaign seems to say. What kind of message does this send about bullying?”

The March campaign is by no means the first such teen pregnancy prevention campaign directed at shaming teens. The brand-new Tumblr Shaming Teen Pregnancy collects ads and images from campaigns past and current showing the many ways that teens have been the brunt of fear-mongering and shaming disguised as “real talk” about the brutal realities of teen pregnancy. Some of the ads are transphobic, while others utilize flagrant slut-shaming.

The NYC campaign also seems to equate “staying together” with “getting married,” which is an odd correlation given the millions of U.S. residents who form long partnerships without ever tying the knot.

The choices the game gives Louis are all about whether to “stay” or “dump” his girlfriend, insisting that he “needs his own chill time” and encouraging him to go “shoot hoops” with his male friends. It’s interesting that while Anaya’s friends in this scenario are actively body-shaming her, Louis’ friends are just hanging out while he’s allowed to feel that Anaya is tying him down. If he can resist the temptations of parties and basketball, Louis gets to go to doctor appointments and pay child support while failing Math classes and struggling to find a job.

Wow. With incentives like that, I’d skive off and play basketball, too.