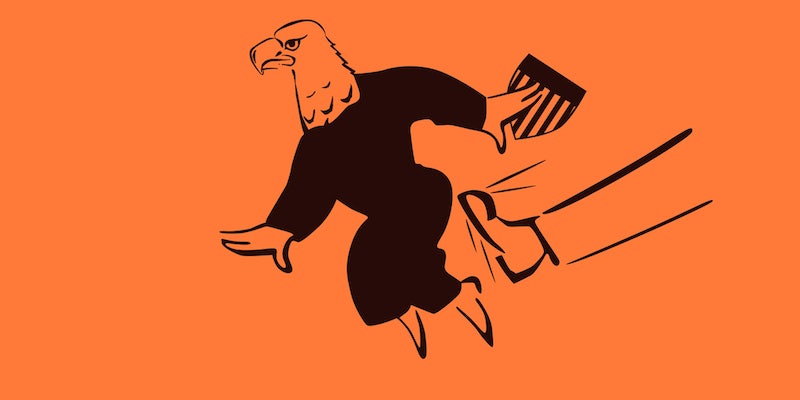 The NSA has overstayed its welcome, America

Like every unwanted houseguest, it's time for the NSA to go.

We’ve all had that friend, who overstays their welcome. We don’t want to say anything initially, because they are a friend after all and they’d totally do the same for us, but eventually enough is enough.

They drink all of your beer.

They use up the last drops of your special coconut shampoo.

They “accidentally” start hitting on your girlfriend while she changes for work.

And they just won’t fucking leave.

Two nights turns into three nights turns into the week turns into “we’re deploying custom malware, distributed through man in the middle attacks, that allows us to hijack millions of Facebook users’ computers, corrupt their data, and siphon all of that precious information back to Fort Meade or a regional data center. Bro, is there any more Yuengling in the fridge?”

Again, we’ve all experienced this.

And like times in the past, it’s finally time to put our foot down.

When Mark Zuckerberg—a man not typically known for his passionate privacy stances—calls the President to complain the NSA has gone way too far, you know we have an overstayer on our hands.

“Zuck” published a perfectly worded, no bullshit post on his Facebook page today. Here’s the most salient part of it, in my opinion:

This is why I’ve been so confused and frustrated by the repeated reports of the behavior of the US government. When our engineers work tirelessly to improve security, we imagine we’re protecting you against criminals, not our own government.

The US government should be the champion for the Internet, not a threat. They need to be much more transparent about what they’re doing, or otherwise people will believe the worst.

It wasn’t really focused on protecting that user data from the possibility of a dystopian, global, massively funded, secret court approved, utterly unconstitutional and seemingly un-overseeable organization that, quite literally, uses billions of taxpayer dollars to intentionally degrade the security of our favorite online services and brands.

And that employs and rewards hackers handsomely for finding novel ways to exploit a user’s machine and mobile devices—this activity has been incentivized by the NSA in a way that would not be possible in the free market (in much the same way that the US government’s desire to get to the Moon before the USSR led to us eventually going to the Moon—not a market-driven demand from consumers, but a specifically funded government initiative.)

I feel like nine months is enough time for a government this technologically savvy to have plugged this gaping constitutional iceberg hole by now. That’s how long it takes for a human to get made, after all.

Instead, all we’ve gotten is a playful assurance from President Obama to Zach Galifianakis that his texts aren’t being spied on.

But what about the rest of us?

I understand that Obama is probably surrounded by convincing surveillance industry Yes Men who tell him bedtime stories about the thousands of fictional terrorists the NSA is stopping each and every day.

These people are Don Drapers of an Orwellian dystopia that benefits almost no one, and threatens the underlying security of our global economy. (Think about how well stock exchanges and bank account balances would fare without a functioning Internet.)

It would appear Obama has become susceptible to the very bubble and echo chamber he feared before entering office.

Because the rest of us—even Zuckerberg—are more than a bit disgusted, terrified, and angry.

Pack up your shit, NSA. You’re on the next Greyhound back to wherever you came from. And no, you can’t have my Netflix password.

You already have it? Well, fuck you then.