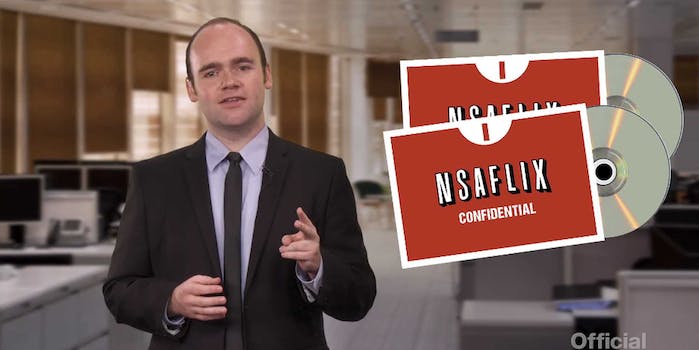 NSA Flix is the Netflix of your personal information

"It's no game. We just like knowing everything about you."

The NSA has taken a lot of flak ever since Edward Snowden leaked information about PRISM, the program which allows the NSA and FBI to monitor nine of the Internet’s biggest companies.

But now they want to change their image. And they want your forgiveness.

That’s why they’re introducing their newest product to the market: NSA Flix. What Netflix did for television shows and movies, NSA Flix plans to do with the millions of confidential files they agency has been gathering and listening in on for years—and it’s just $7.99 a month!

Like its predecessor, NSA Flix offers different categories for you to choose from. You’re now able to watch elderly people who use Skype, view puppy store security footage (instead of a puppy cam), and even read what your boss really thinks about you.

It’s all available on your Xbox 360 where the NSA can continue to watch what confidential information you’re viewing. Or, if you’re more of a physical disc person, you can get a DVD mailed to your home every month. They’d ask for your shipping information, but they’ve already got it on file.

“It’s no game. We just like knowing everything about you,” the NSA Flix spokesperson said.