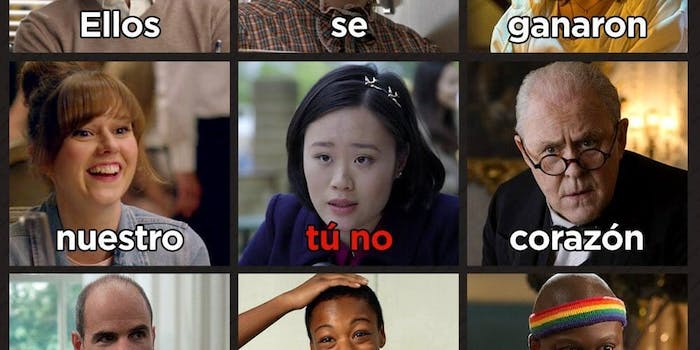 The ‘Not You’ meme loves and appreciates everyone, but not you

Seriously, though. Not you.

Sometimes you want to praise everyone in a group or category, except for that one person who doesn’t deserve it. “You’re all so wonderful!” you think. “Well … not you.” And that’s what the “Not You” meme, which started in Spanish as “Tú No,” is all about.

According to Know Your Meme, “Not You” started with a Facebook post from Netflix Latino, celebrating all the great secondary characters in Netflix’s original shows. There’s Titus Andromedon from Kimmy Schmidt, Poussey from Orange Is the New Black and Claire from all the Marvel shows, among others. But in the middle of the 9-person grid is the conniving and two-faced Courtney Crimsen from 13 Reasons Why, with “Tú No” (“Not You!”) written underneath her. Sorry, Courtney! You kind of deserved it, though.

The grid format caught on quickly amongst Spanish-speaking posters. (It also got big in Italy before making the jump to English.) It’s mainly used to express dislike for characters from various entertainment franchises.

But it doesn’t have to be about characters. “Not you” can apply to any category. This version, found on a Spanish meme Twitter account, thanks pizza for improving our lives with each slice. Except you, pineapple pizza. Not you. (This opinion is objectively incorrect, but it’s a great example of the meme.)

Video games are another popular target of the “not you” meme:

Although this mode is less frequent, “Not You” can also refer back to other memes, like the glorious “boneless pizza” trend from this past June.

About a week after it emerged, “Not You” is everywhere. It’s gone from Spanish-language meme sites to Reddit, where it was translated to English, and then back out to all of the mainstream sites that usually feed on Reddit for memes, like 9gag, iFunny, and various meme-themed Facebook pages.

“Not You” is versatile, it’s international, and it’s extremely easy to replicate, which means it’s very like to become a mainstream “normie” meme, not a niche property coveted by elitist redditors. And, because it appears to have been started by a major brand, Netflix, it can’t be rendered any more uncool if other brands adopt it. And, in fact, they’ve already started to:

Expect Not You to hang around through the end of the month, but it likely won’t be one of the defining memes of the summer. In terms of dank ways to express that you don’t like something, it already has an awful lot of competition.