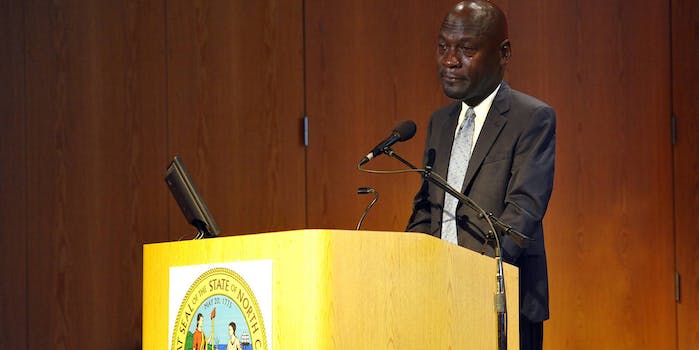 TFW your governor is awful.

The state of North Carolina is none too happy that the NBA decided to pull the 2017 All-Star Game. Citing anti-LGBT legislation, the game has moved from Charlotte to a presumably more inclusive location that has yet to be announced.

An email leaked to the Charlotte Observer shows the ire some North Carolinians are feeling by way of Hornets minority owner Felix Sabates. The correspondence shows Sabates going off in support of HB2, known colloquially as the transgender bathroom law. Regarding trans people having to take a piss, Sabates reportedly had this to say:

this is plain wrong, this could cause irreparable damages to a children’s that don’t understand why they have to see what God did not mean for them to witness, we have some very confused business as well as political humans that frankly have made this a political issue rather then moral issues, SHAME ON THEM.

Not everyone in the Tar Heel State has such discriminatory opinions, however. Meet Sen. Jeff Jackson. He’s had enough of this shit.

A dump truck loaded with $100m was rolling toward Charlotte. Gov. McCrory flagged it down, tossed a match in the back, and let it burn. #HB2

Here's a breakdown of the money the #AllStarGame would have brought to Charlotte. Up in smoke.#ncpol #ncga #clt #HB2 pic.twitter.com/EZpjI2ySeF

Burn. Here’s hoping the powers that be wise up before another all-star opportunity goes up in flames.