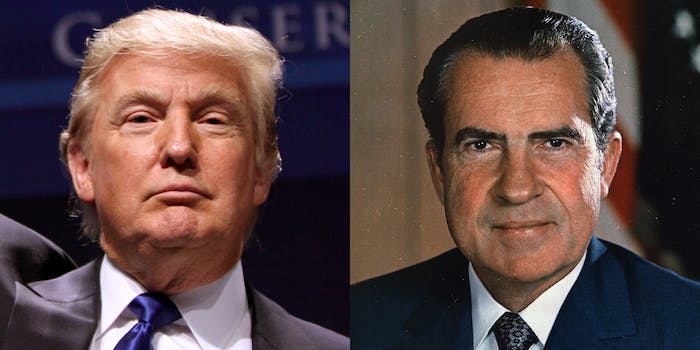 The Nixon Library wants you to know Trump's actions are more unprecedented than you think.

Throughout America’s checkered history of questionable characters in the Oval Office, one stands out as more problematic than the rest: Richard Nixon. He’s the gold-standard for dubious villainy, treachery, and duplicity while in the Oval Office.

He authorized the bugging of the Democratic National Committee’s offices, attempted to fire people investigating him for the crime, defied a court order to turn over tapes of him discussing the matter, and then resigned in disgrace only when it became apparent that the entirety of the House was going to impeach him.

He was bad, which is why it’s so funny that his presidential library took to Twitter after President Donald Trump fired FBI Director James Comey to deliver a “Hey, now,” to the people who had started calling Trump’s behavior Nixonian.

Specifically, people have been referring to Trump’s actions as similar to Nixon’s demand that his Justice Department fire special prosecutor Archibald Cox, who was investigating Nixon’s role in the Watergate scandal and wanted tape recordings from the White House. Both Nixon’s attorney general and then his acting attorney general resigned over the order before Nixon found someone who would comply with his wishes and fire Cox. The incident became known as the ‘Saturday Night Massacre.’

But the Nixon Library wants you to know this is worse.

When you’re ceding the moral high ground to the estate of Richard Nixon, you are not doing something right.

Update 1:52pm CT, May 10: The Nixon Library has apologized for categorizing this fact as ‘fun.’

We use the term FUN FACT in a lot of our posts. Sorry if it doesn't work in this context Setting the record straight #SaturdayNightmassacre