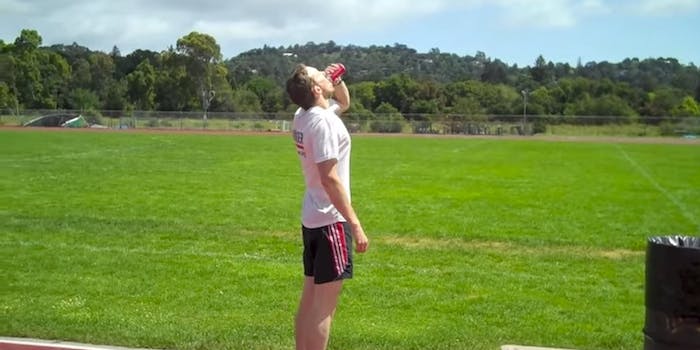 And you thought running a mile was hard.

The Canadian runner just broke the world record for the fastest Beer Mile (yes, it’s a real thing) after completing it in 4:57. The previous record of 5:04 was set by Jim Finlayson in 2007.

Usually, the beer comes with completing a race, but with a Beer Mile, it’s a part of it. It has a list of incredibly strict rules, but basically a runner has to check a beer and then run a lap on the track four times to complete it. Nielsen tried to beat the record in 2012, but he failed. He pledged to not only break the record by the end of 2014, but to do it under five minutes.

To put this in perspective, the fastest mile in 1865—without chugging beers before every lap—was 4:36.

True to his word, Nielsen accomplished the seemingly impossible, yet idiotic task.

Good thing too, because he probably won’t want to look at a beer again for awhile.