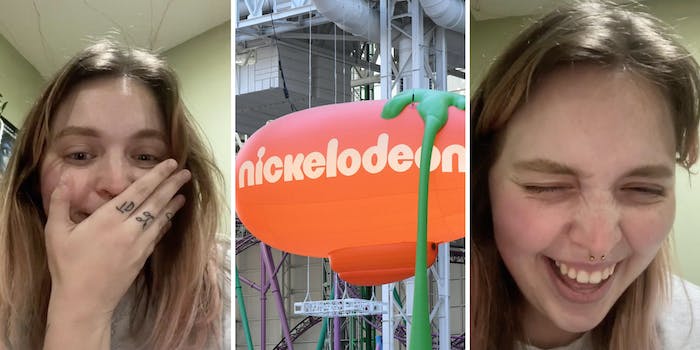 ‘I wish I was kidding’: TikToker says Nickelodeon called the cops on her over JoJo Siwa tweet

In a viral video, a TikToker says Nickelodeon called the cops on her over a tweet she made about JoJo Siwa not being invited to the Kids’ Choice Awards.

“Nickelodeon called the cops on me about 20 minutes ago. I wish I was kidding,” user @hotgirlbookshelff says.

She says she received a call from a New York number and didn’t answer it. Instead, she says she texted the number asking who it was. She says the person responded saying he was a detective with the New York Police Department (NYPD).

She said he wanted to ask her a few questions over the phone, but the TikToker, who lives in Seattle, was unsure why the NYPD would need to talk to her. She says the detective said it was about a tweet.

“Just the Tweet you sent out earlier today. Like I said you’re not in any trouble they sent this over to me and I just have to look into it,” he responded via text, which the TikToker shared screenshots of.

The now-deleted tweet in question shows the TikToker jokingly threatening to burn down the Nickelodeon headquarters.

“I’m about to burn down the nickelodeon headquarters for not inviting jojo siwa to the kids choice awards,” the tweet reads from her account, @kingratatouille.

“I’m literally from Seattle. I’m not planning on burning down the headquarters,” she says in the video.

She says the detective told her Nickelodeon headquarters in Manhattan called in the tweet and that he had to ask her a few questions to close out the situation. He then asked her, she says, what was the meaning behind the tweet and if she knew anyone at Nickelodeon or JoJo Siwa.

She says she clarified that she was upset that Siwa was not invited to the award show after coming out as gay in 2021.

“I was like, ‘No, I don’t know any of them. I wish I knew Jojo, but, basically, I was just mad, because they didn’t invite her to the Kids’ Choice Awards a year after she came out as gay. That’s homophobic,’” she says.

The TikToker says the detective then started laughing, asked if she had any weapons, then apologized for having to call her, before ending the call.

“So, Nickelodeon is homophobic,” she says.

With over 3.5 million views, the video sparked outrage and mockery in the comments.

“Nickelodeon is such a Karen,” one user said.

“Not Nickelodeon being afraid of Stan Twitter,” another said.

Others noted Nickelodeon’s handling of the misconduct and abuse allegations against network’s hitmaker Dan Schneider, who abruptly left the company in 2018 after working there for 25 years.

“Interesting they can call the cops on you in 5 seconds but let Dan Schneider work there like 20 years with no issue,” one user said.

“Bet they didn’t call the cops on Dan schneider,” another said.

The Daily Dot reached out to both user @hotgirlbookshelff and Nickelodeon via email.