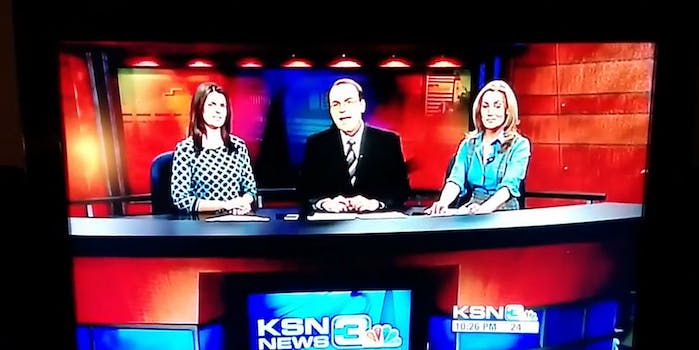 Wichita news anchor signs off with an F-bomb

Well this is one way to round out the week.

Let’s face it: at the end of the workday, the good-natured “goodbye” has been replaced with “let’s get the f*** out of here.” This is even true in local TV news.

While signing off of Wichita’s KSN News at 10pm, anchor Justin Kraemer utters a monotonous goodbye and insists that viewers stay tuned for the upcoming episode of Saturday Night Live. Just before the program goes off the air, Kraemer, apparently unaware that his microphone was still on, added “Let’s get the f*** out of here.” The gaffe was uploaded to YouTube and has received over 500,000 hits.

There has been no official response from KSN about the incident and Kraemer’s station profile and Facebook page remain intact. Commenters on YouTube and Reddit have taken little to no offense to Kraemer’s slip, supporting him with sentiments like “He’s only saying what we’re all thinking.”

While the utterance violates FCC rules and of course undermines Kraemer’s credibility, it’s certainly easy to sympathize. Kraemer’s viewers were relaxing at home while he was stuck at work. The rest of America was about to enjoy the antics of host John Goodman and whoever is on Saturday Night Live these days and he was forced to spend the past half-hour reading dumbed-down tidbits about the latest batch of murders, fires, and weather incidents. With weekend newscasts not receiving the high ratings that are enjoyed by the weekday broadcasts, the 10PM show on a Saturday night is not exactly ideal for exposure.

Unless you swear, of course, in which case you will be plastered all over YouTube.