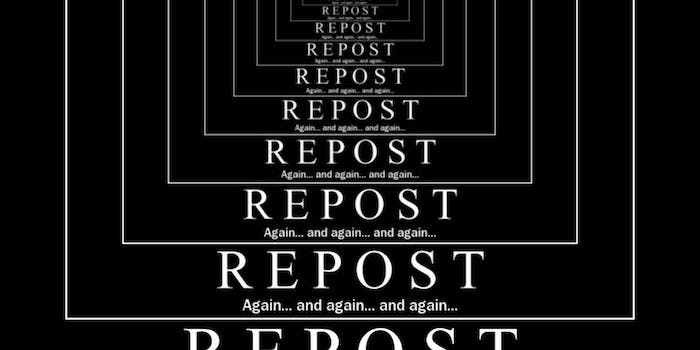 A new weapon in redditors’ war on reposts

The practice is as old as the Internet: take popular content that’s a little old, give it a new title, and post it anew.

It’s called a repost. The reward is instant popularity. The risk, if you’re caught? Condemnation.

To some users of Reddit, there’s no greater threat to the quality of discourse on the social news site. How can new content rise if it’s buried under the muck of a thousand reposts?

But now, redditors have a tool to fight against the much-maligned practice.

Karma Decay, lets users search to see if an image has been posted before on Reddit, and under what context (for an example, see here).

“The Internet is not running out of new content,” the site’s creator, redditor metabeing, wrote in a message to the Daily Dot. “So lets get new content to the front page for the benefit of everyone.”

On reddit, reposters are often also given the label  “karma whore” — someone who posts solely for the purpose of garnering karma, reddit’s internal point system for rewarding popular content. What better way to gain karma than by posting something that you know for certain other redditors like?

Karma Decay works as a check on this practice: if you suspect a redditor has reposted something, you can call out the poster in the comment section with a link to the image on Karma Decay.

That’s the kind of evidence that was hard to come by in the past. And with it, other redditors can decide for themselves if they want to downvote the submission. Enough downvotes, and the repost effectively disappears.

But metabeing said he doesn’t think most reposters are karma whores. Most are fairly innocent, he believes. There’s a lot of material published on Reddit. It’s hard to know if it’s been published before.

“The community depends on participation,” metabeing, who also created the Reddit-inspired site GifSound, wrote. “One way we can help the community keep the quality high and avoid the fate of similar websites is to reduce the number of reposts that clog up the new queue.”

Still,  “it’s polite to search” for any image you post, metabeing said. Reposts flood the system, making it hard to spot new content. If you search before you post, you’re doing yourself and the rest of Reddit a favor.

So in a way, Karma Decay is just a tool for conscientious redditors to get good karma — the real life kind.