Facebook users are sharing a remarkable new photo of an America moments away from tragedy.

It shows John F. Kennedy in his infamous Dallas motorcade, seated next to his wife Jackie and surrounded by thrilled onlookers. In the stark black and white of the photograph, it’s clear everyone (conspiracy theories aside) is oblivious to the looming, shocking tragedy.

It’s posted by photographer Traces of Texas, who says a reader’s aunt took it “moments or minutes before Kennedy was assassinated.” That’s corroborated with a Google image search, which reveals no other instances of the photo.

“Look at the joy on the faces of the crowd….that is the day innocence was lost…” remarked Terry Reeves Roddy.

“What a horrible day for Dallas,” wrote Rick Stone. “I was about 8 blocks away on South Lamar when it happened…….. the whole week was so sad…..started raining …then snowing the day of the funeral…….. no one wanted to work, everyone was watching TV every minute all week long.”

Kathy Cather noted the photographer’s proximity to the president, which ironically may have also helped his assassin.

“It is amazing too how CLOSE the spectators were able to GET to them!!!” she noted.

Correction: An earlier version of this story indicated that this was the first time the public had seen this photo.  A Google Image search at the time revealed no other iterations of that exact file, lending credence to the reader who claimed to have received it from an aunt. However, it is now evident that other scans of the same print existed online before Traces of Texas uploaded this one. 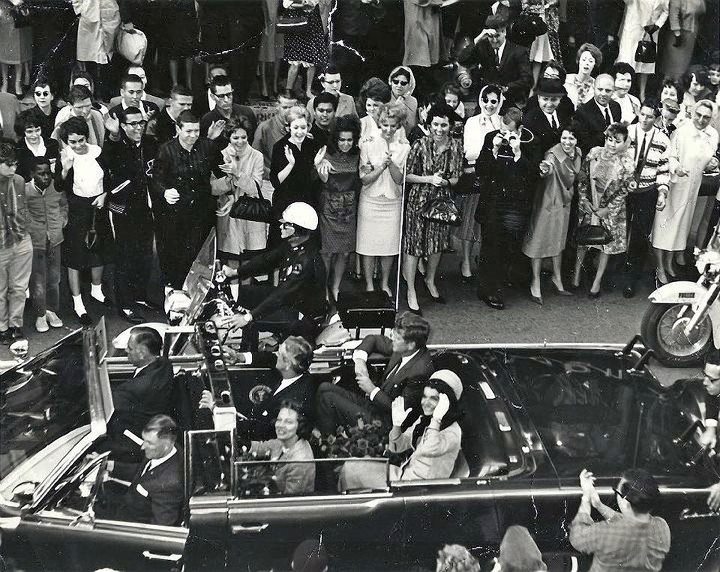