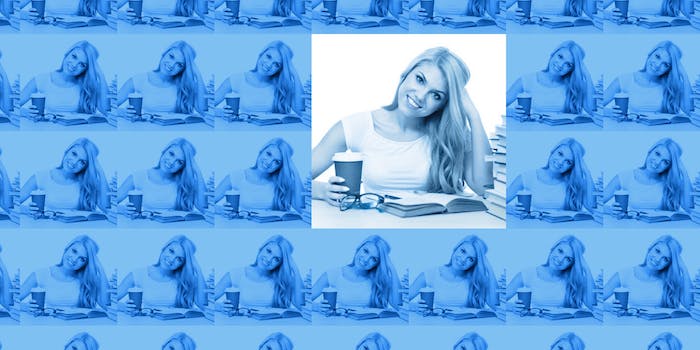 We talked to @Media__Steph about bae, branding, and content

But unless you’re caught up in the middle of it, you may live out your digital days without ever stumbling across Media Twitter, a constantly refreshing circlejerk where people who create content tweet incessantly about their content, and about other people who create it.

Until recently, your life would have been better for never experiencing this chaotic, self-aggrandizing corner of the Twitter universe. Then @Media__Steph arrived. With bubbly emoticons instead of punctuation, incessant strategy buzzwords for vernacular, and a particularly smiley stock image as an avatar, this Twitter account is clearly a parody on Media Twitter and all the self-stroking banality it stands for.

Trying to decide if a clip is pitch-perfect or spot-on haha :)

"TFW" you reveal a surprising truth in a post :) haha pic.twitter.com/EitKoQ8eR6

Mulling humorous options for a "me and bae" tweet :) haha

Excited to announce that a post I grabbed last week still has some legs on it! :)

Good show! So in the grand media tradition, we contacted “Steph” for an interview. What better way to make fun of content creation than to create content around it?

The person (or people) who operate the account declined to reveal themselves for this interview, or even to drop the colloquialisms when emailing with us, citing the need to remain “in character while I build out my engagement :)”. That’s dedication. What follows is a lightly formatted, all-sic transcript from our email exchange with @Media_Steph, Media Twitter’s Quixotean id.

Daily Dot: Hi Steph! This account is a delight.

Media Steph: Your account is a delight! Haha :) Love grabbing nuggets from it xoxo

I assume you live and work in New York. Is that correct?

You absolutely nailed it :) I basically never want to leave! Now that I’ve officially bubbled up into the New York media scene on Twitter I don’t have to worry about my future at all! It’s all you need :) Love you xoxo

When did you first realize you were passionate about media?

I saw a flashy hed on a post that said “This Pug Is All Of Us.” I was like “haha what?” I decided to start combing through the post to see if the pug was me. It was! I immediately started screaming “it me!” and “same!” and “yassssss!” It was in that moment that I knew I was ready to put the “me” in media haha :) I decided to dedicate my life to revealing the surprising truth about various topics and spicing up copy with humorous sayings! xoxo

Did that one quote perfectly sum it up? :)

It really did, thanks. Not to be too forward, but how is your media career going? Are you employed by a publisher I might be familiar with?

I’m going to have to hold off on revealing the surprising truth about this :)

Going to drop a truth bomb here and say that my absolute favorite social media platform is Media Twitter! :) Every media professional’s tweet is unique like a snowflake! :) Haha you can grab for pull-quote xoxo

“Going to drop a truth bomb here and say that my absolute favorite social media platform is Media Twitter! :) Every media professional’s tweet is unique like a snowflake! :) Haha you can grab for pull-quote xoxo”

What do you do for fun/on the weekends?

You know what they say: Work hard, “this may play well on social” harder :) haha

It’s definitely important for me to be building out my network and honing my craft even when I’m off the clock (haha I’m kind of a workaholic) so sometimes I’ll grab drinks with media friends at bars and network with mutuals or go to their Brooklyn apartments and delve into some personal news! I’ll admit, I DEFINITELY can’t resist circling back to work topics sometimes. Wait, WHICH celeb took to Twitter? Should I re-up this evergreen post on social? There still seems to be a bit of steam on it! Has anyone overheard a humorous conversation recently? That’s “OH” on Twitter haha :)

This might be a good excerpt to take on for a one-off :)

I appreciate the suggestion. Does the habit of thinking in content strategy parlance (use this as a pull-quote, might be a good excerpt, etc.) ever have any weird effects on your life?

Haha no unless you consider producing snackable content around the clock a weird effect :)

Do you have any advice to the aspiring young content creators out there reading this?

Definitely start mulling over ideas for quick-hits you can scrape together that will climb Chartbeat. The other nugget of advice I would offer is to create a rough skeleton of some of the #Relationshipgoals and #Squadgoals you’d like to achieve within the next 10 years. Some of those things will absolutely get some traction on Twitter if you decide to pub! :)

“Definitely start mulling over ideas for quick-hits you can scrape together that will climb Chartbeat. The other nugget of advice I would offer is to create a rough skeleton of some of the #Relationshipgoals and #Squadgoals you’d like to achieve within the next 10 years.”

How many times have you been to SXSW? What do you think of it?

This is the conversation we should be having! :) I would absolutely call myself a pop culture enthusiast however I think I’m finally ready to break my silence on this topic and perfectly reveal that I’ve never attended it! I might go next year with “bae” (aggregation) haha

Let’s do some word association. Cool?

Where do you see yourself in five years?

Writing an epic Twitter essay that flawlessly says what we were all thinking :)

Explain “The Dress” in five words or less.

Definitely should have grabbed first

Sorry! Just wondering. Don’t you think it’s important for a brand to stay edgy by pushing the envelope with racy content?

Chartbeat tweeted at me telling me I was “bae” and now we’re in a relationship IRL so pushing the envelope definitely has its perks haha :) I can grab embed! xoxo

Totally. Well you seem to totally love media, would you ever consider moving to a different field?

No! I would have to scrap my Twitter handle haha! You can take the Steph out of media but you can’t take the media out of Steph :)

Right on, thanks for your time.