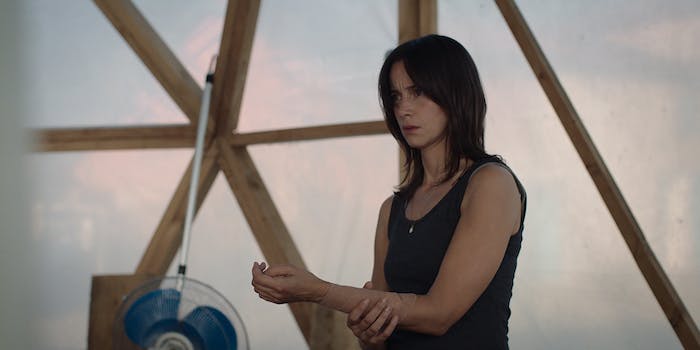 Set on an idyllic French farm, The Swarm is, metaphorically speaking, about the horrors of running a small business. In a more literal sense though, it’s about being eaten alive by a plague of bloodthirsty locusts. A gripping little horror story for all you cottagecore fantasists out there.

Suliane Brahim stars as Virginie, the stressed single mother of two kids: teenage Laura (Marie Narbonne) and seven-year-old Gaston (Raphael Romand). After the death of her husband, Virginie is trying to build a new life as a locust farmer, breeding the insects in a greenhouse-like enclosure.

The business is not going well. Despite their high protein content, locust-based foodstuffs are not a lucrative market. Virginie is also not a very effective saleswoman. Facing the likelihood that her locusts won’t lay enough eggs to turn a profit, she becomes short-tempered and careless, starting fights with potential customers and drawing the ire of her teenage daughter. But then Virginie stumbles across an unexpected solution. When the locusts eat human blood, they become incredibly, profitably productive.

It’s easy to imagine a glossy American version of The Swarm, involving a lot more screaming and running around. But director Just Philippot is working squarely in the European indie movie zone. The teenage characters look and act like actual teens. There are complicated family dynamics at play. The first half of the film is a straightforward drama, ramping up the tension around Virginie’s seemingly-doomed business venture. She makes bad decision after bad decision, rebuffing the help of her unreasonably friendly neighbor Karim (Sofian Khammes). When the sci-fi/horror elements kick in during the film’s second act, they’re all the more effective because the setting feels so real.

The Swarm works perfectly well as a straightforward monster movie, reveling in the creepiness of flesh-eating insects. It’s not for the fainthearted, but it’s not an outright gore-fest either. However, the thing that really makes this film memorable is the character work. Virginie’s locust farm makes for a unique setting, and Suliane Brahim offers us a fascinatingly watchable (if not likeable) protagonist. Obsessed with expanding the farm, her ambitions require a literal toll of blood. You could read this as an allegory for modern capitalism, but it’s also a horror genre classic: A character who willfully ignores their self-preservation instincts, and resultingly pays the price. (The fact that the blood-drinking locusts “turn bad” is not, I think, a real spoiler.)

Released on Netflix with zero fanfare, this small but effective horror movie is well worth checking out.